If there is an autobiographical book that woke me up to new realities, it is Hawa Abidi’s ‘Keeping Hope Alive’. In very simple ways, this book was an axe for the frozen sea. For a long while, I yearned to see the woman behind the story. Meeting with Dr. Hawa Abdi, her humility, her grace, her identity with her continent, her passion for a country that was almost unlovable and her faith in peace was comparable to none I had known. I knew I must take a piece of this woman for keeps in my world. Through our discussion which

lasted over an hour, Mama Hawa as she is fondly called patiently answered to my entire question as can be read here.

One thing was clear; the woman I read about was no different from the woman I met.  The book Keeping Hope Alive is a true representation of the ‘Mama Hawa’ I listened to. Beautifully written in the tone of Mariama Ba’s fiction novel ‘So Long a Letter’, Hawa Abdi’s story was shared to the world with the hope that it invites truth to come save her country from an intractable war that has swallowed them. This book co-authored by Sarah J. Robbins begins with a reflection of Somalia as it was when Hawa Abdi was a young Soviet Union graduate returnee with aspiration and clarity of purpose. It ends with a graceful elderly woman to whom life has splashed its many colours of disappointment on but yet her hope for peace continues to shine forth. 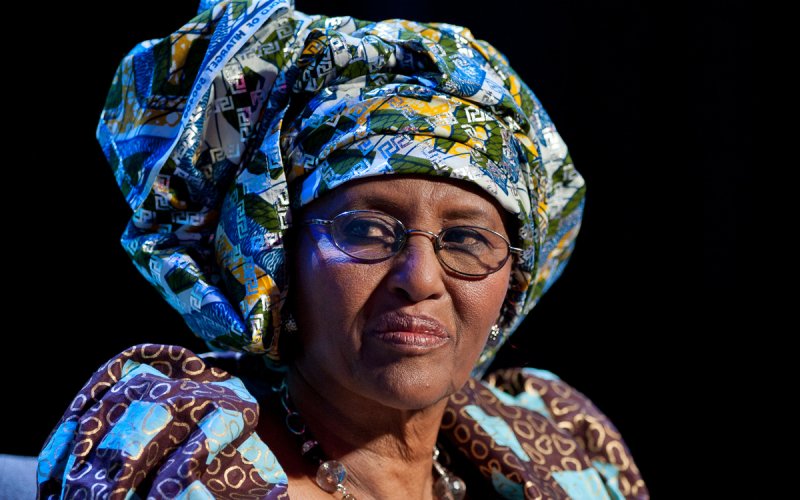 Hawa’s life was filled with a lineage of dead children, siblings, parents and fellow comrades with whom she had the unavoidable duty to close their lifeless eyes and bury. Her childhood was scared; she was at a time a child and inside her was another child growing. Circumcision of the genitals was also bestowed to her small body. Hawa was soon to know the death of the first baby that suckled her breast, lying lifeless in her arms few days after her grandmother Ayeyo’s death. Her father died some years after her mother and her beloved sisters followed. Her world got smaller and smaller; the demise of her only son Ahmed made death her neighbour. Indeed the landmarks of her life were marked with graves of loved ones. Through all this, Hawa Abdi thrived with all resilience.  In the environment of Martini hospital, her dreams to be a doctor blossomed through the rough roads of grief for a mother she loved. Over the years, birthing babies became second nature to her as she grew to be a Gynaecologist, a Lawyer and a giant in the humanitarian world.

In 1983, her family moved to the rural area to begin the life she dreamed for them. Starting a small clinic for rural women, she would hold hands with her two daughters Deqo and Amina as they marched into the neighbouring villages treating people and encouraging health seeking attitudes. These three women with a strong bond grew into doctors and together grew their Hawa’s endeavour into a globally acknowledged organisation DHAF (Dr. Hawa Abdi Foundation). DHAF became a haven which as at 2009, was accommodating 90,000 Somalians displaced by an internal war.

This book chronicled the failure of governance in Somalia from the time of Siad Barre, leading to a war that remains intractable even 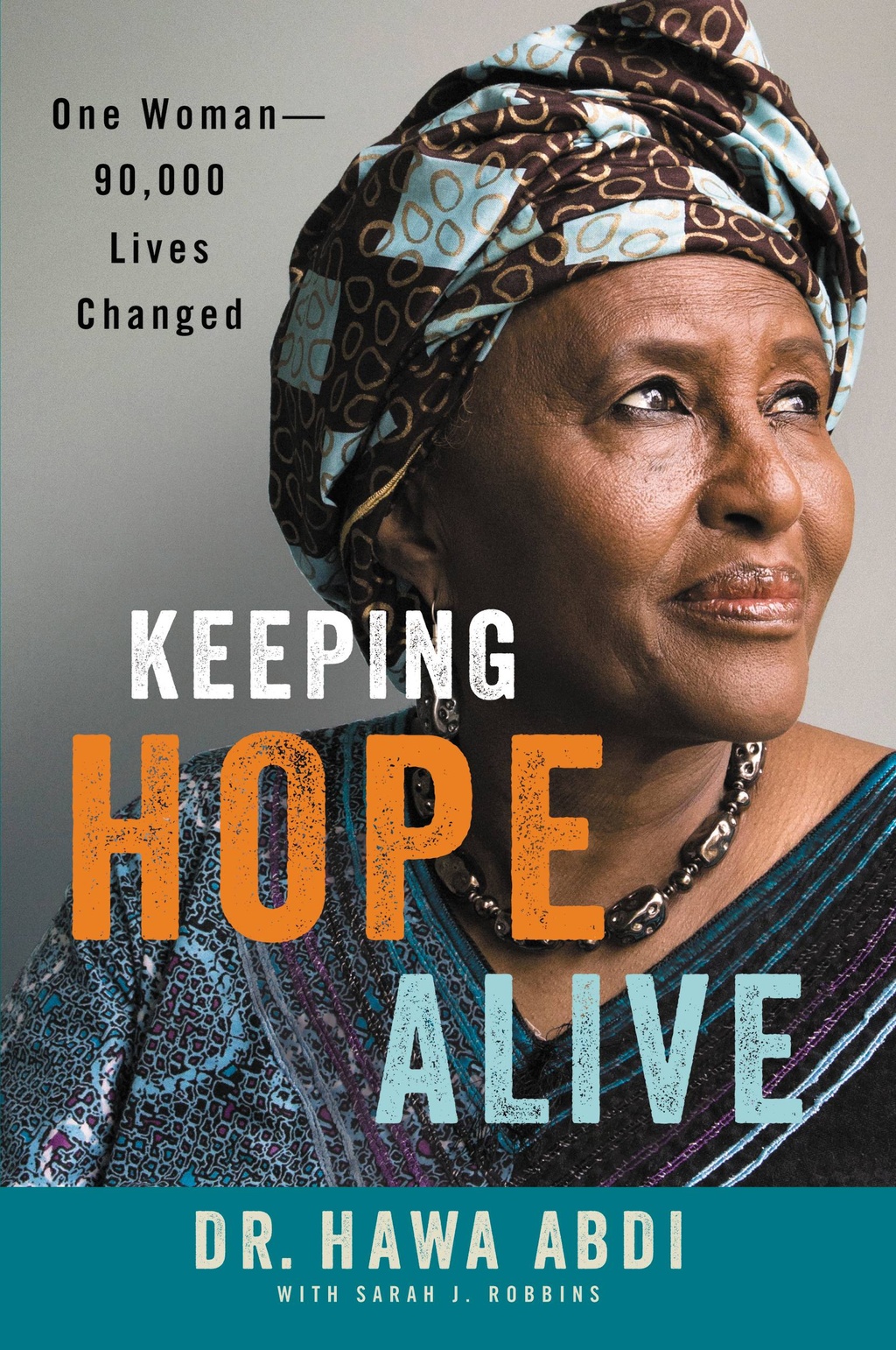 in present day Somalia. From the Ogaden war between Somalia and Ethiopia under Siad Barre’s tenure, Somalia disintegrated downwards. War really begins when it ends at the front-line. Men returning from war could only bring with them, weapons like anger, hatred and frustration. This weapons they used on the same people they once fought to protect. Clan politics took over, war raged, there was heavy shelling, rattling guns, mass graves as men were buried alive and dead. The Hawa Abdi Hospital began to welcome a different type of patients. There, the number of starving people soon grew more than the number of wounded people. Shelter, water, food and health were all she offered to people who now missed the peace that once was. The world heard and sent help too.

The Global Peace Index measured by the Institute for Economics and Peace’s (IEP’s) latest study for 2014 shows that only eleven countries of the 162  countries studied globally are conflict free. As is the case of  Somalia, trends in sustaining peace are shifting from hostility between states, to a rise in the number and intensity of internal conflicts. The economic cost of such violence to our  global economy today is huge; an equivalent of around US$1,350 per person, or twice the size of Africa’s economy (IEP,2014).  Though peace building remains a prerequisite for socio-economic development,violence remains the true law of the land in Somalia, a nation which continues to bleed mostly from the wounds they inflict on one another. Of a truth, people who are fighting will never be able to build.

To the many dead souls, we cannot count, but we can remember them. This is what Hawa Abdi and Sarah Robbins have done by weaving together the experiences of Somalians dead and alive around the life of a woman who wishes nothing more than peace for her nation.  From a development perspective, Keeping Hope Alive is a book that brings to the fore the issues of maternal health, the evil of war and more so the dynamics of managing Internally Displaced People. In a world that has gotten incrementally less peaceful with internal conflicts,  how are our conflict ridden countries managing the rising numbers of Internally Displaced People? What can we learn from the patriot Dr. Hawa Abdi and the Somalia she continues to keep hope alive for? I truly wish we can validate her more.

To Hawa Abdi, reading your book made my heart grow larger. Now for every day I pray that the burden of war and violence be light on us, I pray more that our shoulders be broadened like yours to carry what comes to us. You have made an indelible mark in the heart of Africa, as the heart does not forget, Africans will not forget. Our history will remain incomplete without you. Thank you Mama Hawa!

To support Dr. Abdi in continuously creating access to human right for the Somali people, kindly forward contributions directly to her organisation through their website www.dhaf.org