Some topics make you have premature writer’s block, not because you don’t know what to write about but more because you suffer

a creative blockage in struggling with how to take it on. This I experience every time I try discussing  issues around  the Skin trade. Where does one start from? do I hold on to the faceless clients of the sisters in the red light district or do I talk about their pimp? Maybe I should focus on the sisters and brothers of the brothel who have been mercilessly judged in different mediums or do I focus on the law that criminalizes or decriminalizes them? As is the case in life, you have to play a game of letting go and holding on at different times in order to gain balance. So I decided to play a game, the game of naming. The world calls the flesh for cash business ‘Prostitution‘ but there are many more names than one can imagine that takes its bearing from this sector. To get started, I went for a wordle game that will help me appreciate all the names I know referring to this controversial profession.  This is what I produced. 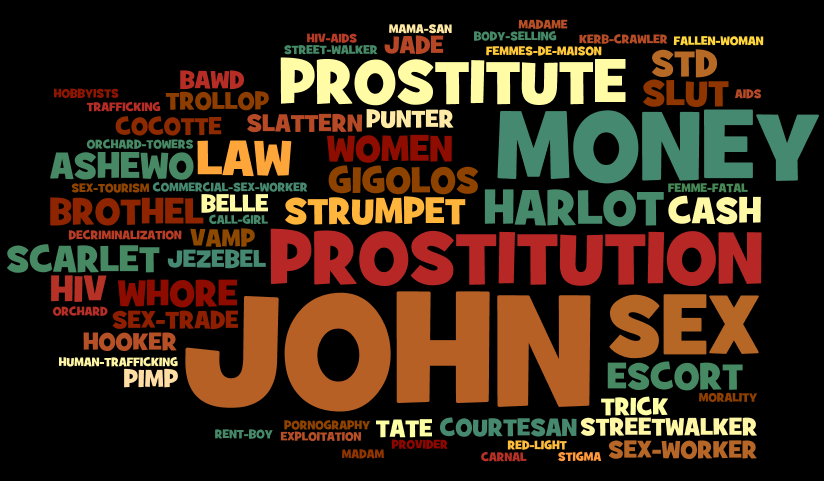 While its amusing to see how much name can be derived from one sector of the economy, I must agree that this has charged me up.  Worthy of note is the fact that for once on this page, the client of the red light district is not masked, he is called ‘John’.

I explored Cyprian Ekwensi’s ‘Jagua Nana’ recently and I must say it was ingenious in many ways especially when I consider the time it was published. I cannot help but link its characters and narratives to the realities of prostitution in our world. Prostitution is dynamic in the sense that the sentiment around it is very relative. In many countries, I find that it is legalized and regulated, but isn’t it astonishing that ten most happiest countries in  the world’s  are places where the skin trade is legal? From Sweden, Denmark, New Zealand, Norway, Ireland, to Canada, Belgium , Switzerland, Finland and the Netherlands,  we find that most of the world’s strongest economies legalize the flesh for cash business. On a lighter side, I wonder if it could be a recipe for a happy and economically strong country?

In America and most of Africa, prostitution remains illegal. In fact many commercial  sex workers in Africa are known to engage in survival sex as a result of the poverty they experience. But this is not the case for ‘Jagua’ in Ekwensi’s Novel published in 1961. Having been pressured to marry a young man in the coal city, her marriage was no bliss as infertility loomed over for some years. The strains of infertility coupled with her stifled feeling of carrying on with the role of a house wife led her to the train station and thus her  journey on the Lagos fast lane began. Jagua was not presented as a victim of poverty, neither was her husband poor,  her drive for the skin trade can be judged as a product of adventure.Maybe in our generation, it will be tagged  ‘coping mechanism’.Talking about being in the skin trade as a coping mechanism, Suzy Favour Hamilton comes to mind.

I do not remember Mrs. Hamilton for her masked persona, I remember her as the Olympic medallist, a hard working woman who has achieved so much that we should be proud for. However, a phenomenon relevant to this discussion is well captured in her life’s experience. When she said she had mistakenly joined the sex trade as a coping mechanism against the challenges around her life, it got me thinking. She precisely gave me a mental shift towards the understanding of the drivers of prostitution. She provoked a thinking outside the conventional box of what could make anyone engage in the skin trade. While I still try to probe further, her statement on her disgust for the ‘JOHN’ that broke the honour code and exposed her made me stop.“I can’t expect you to understand, you aren’t in that world… you don’t know this world. You’re making judgements on what you see on television or what you perceive,” she said. Now I agree that some things are not meant to be understood. Even as I hate that she alone was exposed, even as I feel its unfair that  the face of this JOHN did not splash on the screen and in the papers like her’s, and no one asked for him, I may never understand w

Jagua and Suzy alike makes me think that there is need to understand the intricacies of this sector before we engage in naming it or better still executing the trade.What does this have to do with international development you may ask? Everything from global health  to unemployment, Human trafficking and poverty amongst others. In the wake of high HIV/AIDS prevalence, trafficking of young women and abusing their right to freedom, with litters of poverty all around us, this issues must be faced.   Hence we must think  and think again, in the light of what we know about the different perceptions of prostitution world over, should it be eradicated or should it be managed?