Back in the days; three decades ago and beyond, ‘the Incorruptible Judge’ by D. Olu Olagoke was a must-read for most Nigerian

in-school children at primary or junior secondary level. Finding it in the bookshop almost three decades after gave me a nostalgic feeling. I knew I had to read it again wearing the lens of an older person. The world around me has changed greatly in the past 30 years, but expectedly this book didn’t change. My understanding of it, its relevance and the interpretations I could give to it has surely changed.
In the play ‘The Incorruptible Judge’, we meet Ajala, the graduate with a completely worn out shoe telling tales of unlucky miles he has walked trying to get a job. He is the son of a carpenter father and a petty trader mother with six more siblings to cater for. His education remains indebted and his first salaries if employed will make up for that. Despite his excellent track records, unlucky Ajala has been unable to reap the 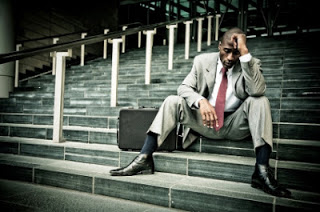 dividends of his investment in education. Ajala reminds us of the sea of graduates mostly in African countries who spend years before they may finally be employed as a result of Job scarcity. Yet they are saddled with responsibilities they cannot wish away.
His application to the Government Development Department as a Third Class Clerk in their office ushers a chance meeting with his contemporary Femi. Unlike Ajala, Femi represents the privileged children of the rich who have no experience of lack. He is employed through his father’s network. Femi vets Ajala’s application pack just before he meets with the grey haired, heavily spectacled Establishment Officer Mr. James Ade Agbalowomeri whose personality cows the young school leaver. 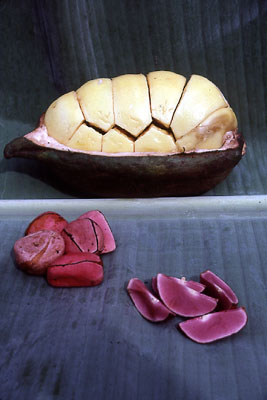 Capturing a competitive space with many qualified personnel and few jobs to get around, Mr. Agbalowomeri sets getting “Kola” and not just qualification as the condition for employing Ajala whom he claims to fancy. “Kola” in Africa is a nut fruit from the kola tree, a symbol of appeasement used in social and private settings, it is also known as the food of the ancestors. Kola nuts are an important part of the traditional spiritual practice of culture and religion in West Africa, particularly Nigeria, but it symbolizes other things too. It is the pseudonym for bribery. In this case, the Establishment Officer’s “Kola” is £5 (five pounds) bribery. He insists Ajala must bring this and is able to bring it considering his credit worthiness for a study loan still hanging over

his life. Despite his plea, a completely dejected Ajala is further harassed by the words of the officer who boasts of threatening non-compliant employees with dismissal or issuance of bad discharge certificate. This scene is not unpopular to many Job seekers today. It projects directly the imbalanced power relation between the employee and the employer in many societies which creates vulnerability.
Seeking solution out of this, Femi his friend acts as the voice of reason, reminding him of the value their principal instilled in them as students. “Remember what the principal says about taking or giving bribes? It is the canker eating into the very fabric of our nation. We as the future hopes of this country must steer clear of bribery…whether he calls it Kola or money, I am sure it is still bribe”. Ajala is encouraged to approach the Police, demanding justice as he learns the act of bribery is criminal.
Mr. Agbalowomeri got his token bribery of £5, and true to his word, he gives Ajala a confirmation letter of employment with a commencing salary of £172.10 per annum. Detective- Sergeant Okoro arrived to the office of the Establishment Officer the 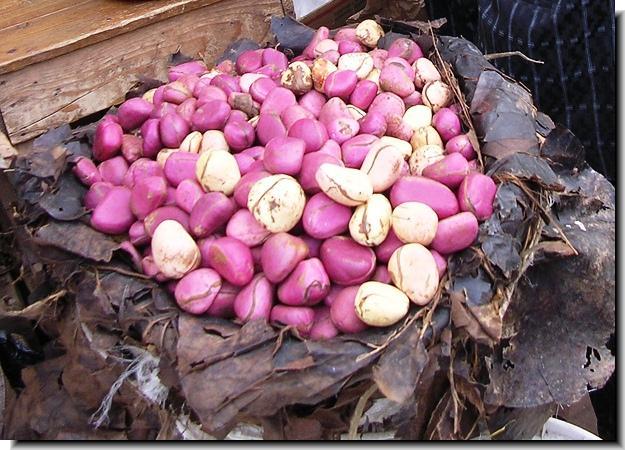 moment Ajala coughed to signal him the bribe has been received. The search for the marked £5 notes (with recorded numbers) was instructed on the officer who was in denial.
Indeed the real ‘kola’ is edible, but the £5 currency note as a ‘kola’ is no bread and butter. Crestfallen Mr. Agbalowomeri had a grip on his throat as Seargent Okoro forced him to spit out the currency notes which he was trying to swallow in an attempt to destroy evidence. He was indeed the very picture of despondency.
Narrating his story, he swears on God as witness to his friend Mr. Duroayo whose Son in-law Justice Faderin has been assigned to try his case. Bribery is in Mr. Agbalowomeri’s vein, giving ten pounds and a bottle of whisky, Mr. Durodayo was commissioned to win his son inlaw over with a gift of twenty five (25) guineas, and later fifty (50) guineas.
The moral climax of the play is the judgement given by Justice Faderin who does not take bribe. With every form of emotional 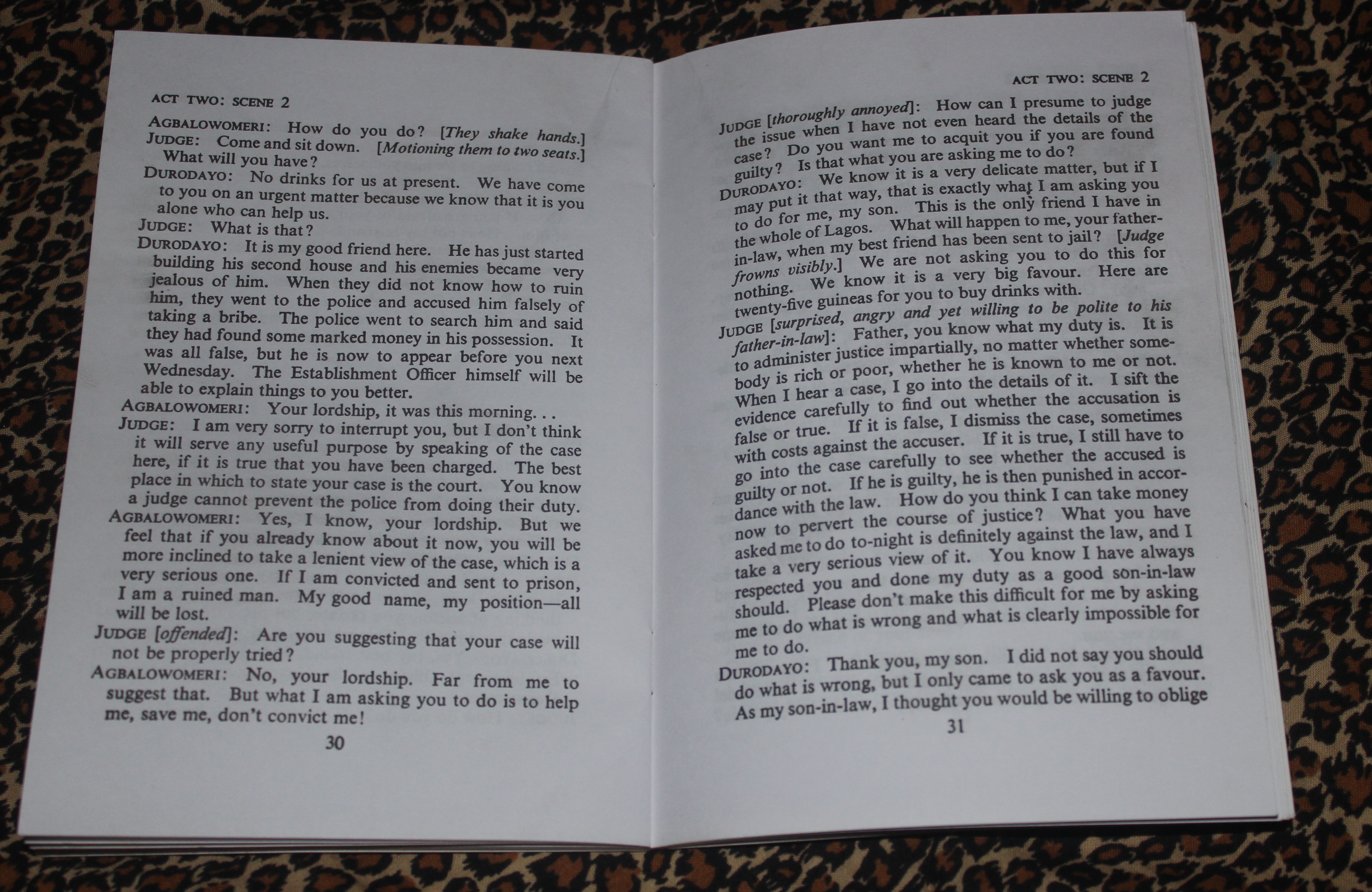 blackmail strategically instituted through familial and tribal relationship, Justice Faderin who was inclined about the case, took no lenient view. In emphasizing the law as no respecter of person, he said ‘if the citadel of justice is corrupt, what will happen to the body politics? It will be completely rotten and collapse.’
The grey haired, heavily spectacled Mr. James Ade Agbalowomeri, with 20years experience as Establishment officer of the Government Development Department, with many family responsibilities is in the dock. Mr. Agbalowomeri, the son of the Ogbuluefon of the famous Kiriji War has been charged in a sensational court case. He with his illustrious pedigree swore with the bible in the witness box and severally called God as his witness but God was asleep.
Where bribery fails, mercy plea may help. The guilty man pled for mercy quoting hackneyed Shakespeare “the quality of mercy is not strained. It droppeth…” He is finally refused his option of a fine and sent to 3years imprisonment with hard labour by a Judge who understands the necessity of deterring others from following a bad example.

Published in 1962 and republished in 2011, this play, written in very simple language has remained a classic. It has become even more alive in our society of today perverse with cases of bribery and incessant corrupt practices than it could have been in the years the author wrote it. While the author in his preface states that the Incorruptible Judge is not primarily meant to teach morals, my experience of engaging it as a child taught me otherwise. It was my first encounter with the word ‘bribery’ and its true meaning. It triggered my imagination of the power of the law; my first engagement with a book bringing alive a fictionalized courtroom performance. But I ask, how well did the values this book sought to imbibe withstand time?
More than anything else, this book raises more questions for me now, especially on the experiences of job seekers world over. I am reflecting deeper on the situations of employment and rule of law, and their linkages to development in today’s world. To better conceptualize this, I will be comparing the Incorruptible Judge with Greg Mills and Jeffrey Herbst’s ‘Africa’s Third Liberation’ in the very next post.
– Written by Adaobi Nkeokelonye

10 thoughts on “The Incorruptible Judge and the Incorrigible Liar”