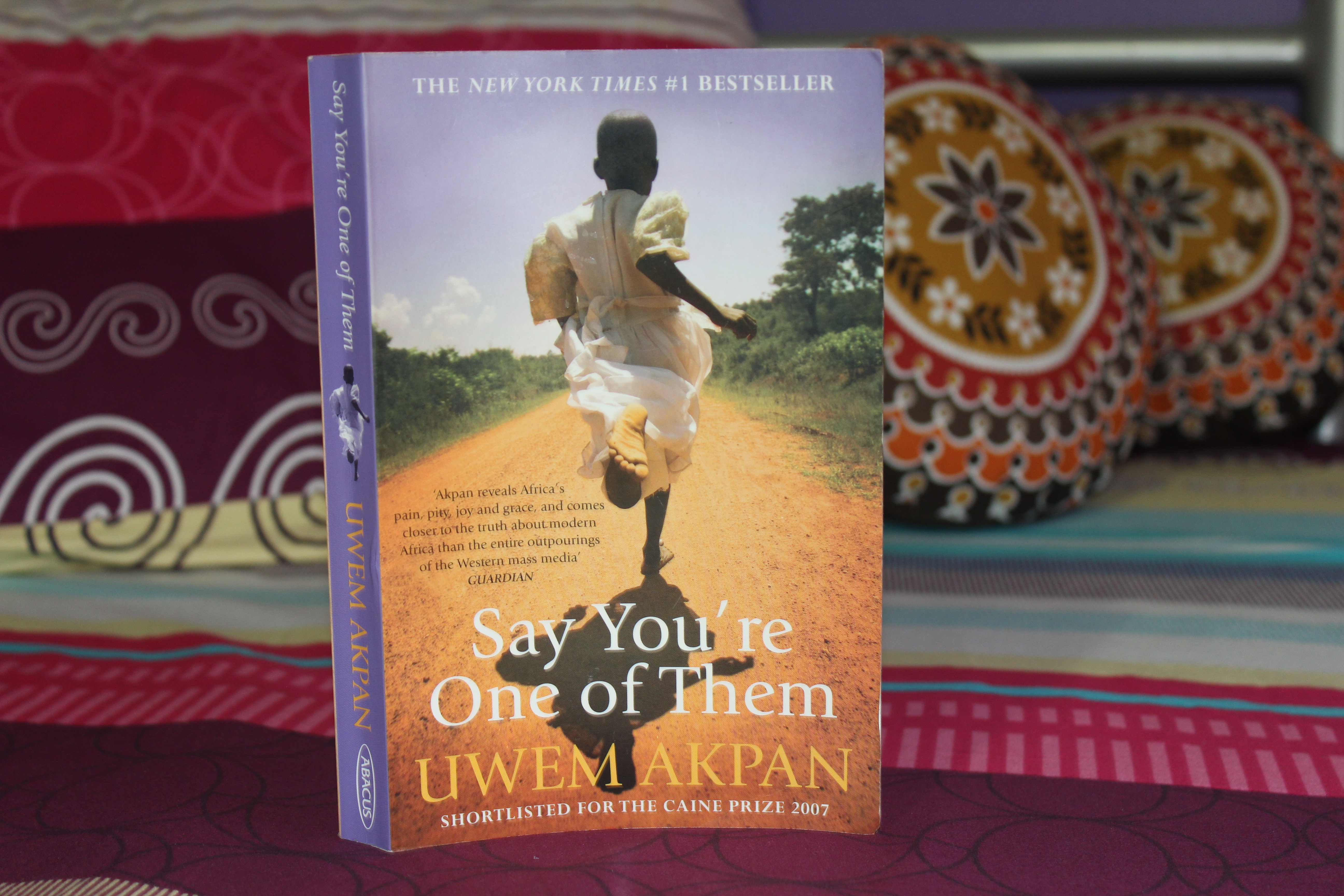 from reading this book severally by friends who found it a very difficult read. Now I know why. The author Uwem Akpan in this collection of short stories did not write to entertain, he wrote to inform. In capturing the detailed realities of children in modern Africa, the writer ought to write like a child. Writing in the voice of distressed children is no easy task, more so reading such stories. From the stories in this book, every reader will see in detail how a child’s giggle is muffled by violence and fear, how their spirited dance is paused because the earth on which they stand is soaked with blood.
From the story of Maisha in An Ex-Mas Feast (which I am saving for a later review), I continued to the disturbing novella sized Fattening for Gabon which reveals the footprints of slavery as Kotchipka (Pascal) and his sister Yewa (Mary) are trafficked by their uncle Fofo after their parents bow their lives to AIDS in their home town Brafe.  Indeed selling a nephew could be more difficult than selling other kids. Though the chains tying their hands are invisible, either way, they are sold like chicken in an open market.
What Language is that? Adults ask this question when we try to crack the code of our children’s language. The story reflects on the relationship of Selam and her best friend as their parents inject into them the language of hatred triggered by their misunderstanding of faith difference. Like in a typical scenario as it happened to most of us, Mummy pats a space between her and daddy for the child to sit. Then these words that desecrate a child’s innocence follow. ‘Honey, we don’t want you to play with that girl anymore; the Muslim girl’ mummy said. These girls mock their parents’ response to faith difference by improvising a new language that can only be decoded by those who still love as children do.
Religious imageries litter many corners of this book; Luxurious Hearses captures the impact of religious conflict on children. Two brothers Yusuf and Jubril inherit the underserving struggle of choosing whether to identify with the Christian or Muslim faith years after their parents’ marriage end. Jubril and his brother Yusuf were born out of a relationship that was ethno-religiously conflicting, hence becoming a community concern. His parents Aisha and Bartholomew‘s union certainly unnerved the people of UKhemehi. These two brothers gave their life to fighting for a faith identity as Yusuf is stoned to death for apostasy. 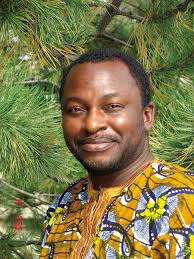 Jubril’s journey from the north to the south of Nigeria is symbolic. Like all the children in this book, he was on the path of finding an answer to a torn identity and forced to say ‘I be one of you’.  The danger of having a dual ethnic identity could not be better captured than in the experience of Monique and her toddler brother Jean in My Parent’s Bedroom. This will serve as a torturous ending, perhaps the most tragic short story I ever read.
‘You have to learn to take care of Jean, Monique’. Her mother Maman says as she prepares her daughter for a life without her in war torn Rwanda where neither god nor marriage was strong enough to dilute any tribe’s blood.
Thinking of how the United Nations may have helped save the Rwandan genocide is hopeless as was also captured by Monique’s parents.

‘I think we should run to those UN soldiers by the street corner…the soldiers are our only hope’ her father said.
‘They?  Hopeless!’ Maman responded.

Their home once full of love now smells like an abattoir, their ceiling creaking and sagging in the middle; it’s full of Tutsi’s hidden by her parents. Even Maman goes to hide in the ceiling every night with a lie that she sleeps out.

‘Nobody is telling me the truth today. Tomorrow I must remind them that lying is a sin’ Monique said.

When tomorrow finally came, Monique’s only inheritance was her little brother, a broken crucifix and a gruesome memory of witnessing her father unavoidably machete her mother’s head in an ethnic cleansing ritual right in their bedroom.

‘There is blood everywhere…it flows into Maman’s eyes, she looks at us through the blood-the blood overflows her eyelids and Maman is weeping red tears. My bladder softens and pee flows down my legs towards the blood. The blood overpowers it, bathing my feet. Papa opens his eyes… he bends down and closes Maman’s eyes with trembling hands…Papa covers Maman with a white bedspread and goes off with the mob without looking at me or Jean… Jean is startled by my shout. He stamps around in the blood as if he were playing in mud.
Little Jean yanks the cloth off Manan and tries to wake her. He straightens her finger,but it bends back slowly, as if she were teasing him. He tries to bring together the two halves of Maman’s head, without success. He sticks his fingers into Maman’s hair and kneads it, the block thick like red shampoo. As the ceiling people weep, he wipes his hands on her clothes and walks outside giggling.

Her mother’s words remained a legacy that will ensure she and her brother survives with an identity torn between the Hutus and the Tutsis.

‘When they ask you,’ Maman says sternly without looking at Monique, ‘say you’re one of them, Ok?’
‘Who?’ Monique asked
‘Anybody’ Maman responded.

With two novellas and three short stories in one book the writer projects many international development issues such as child trafficking, 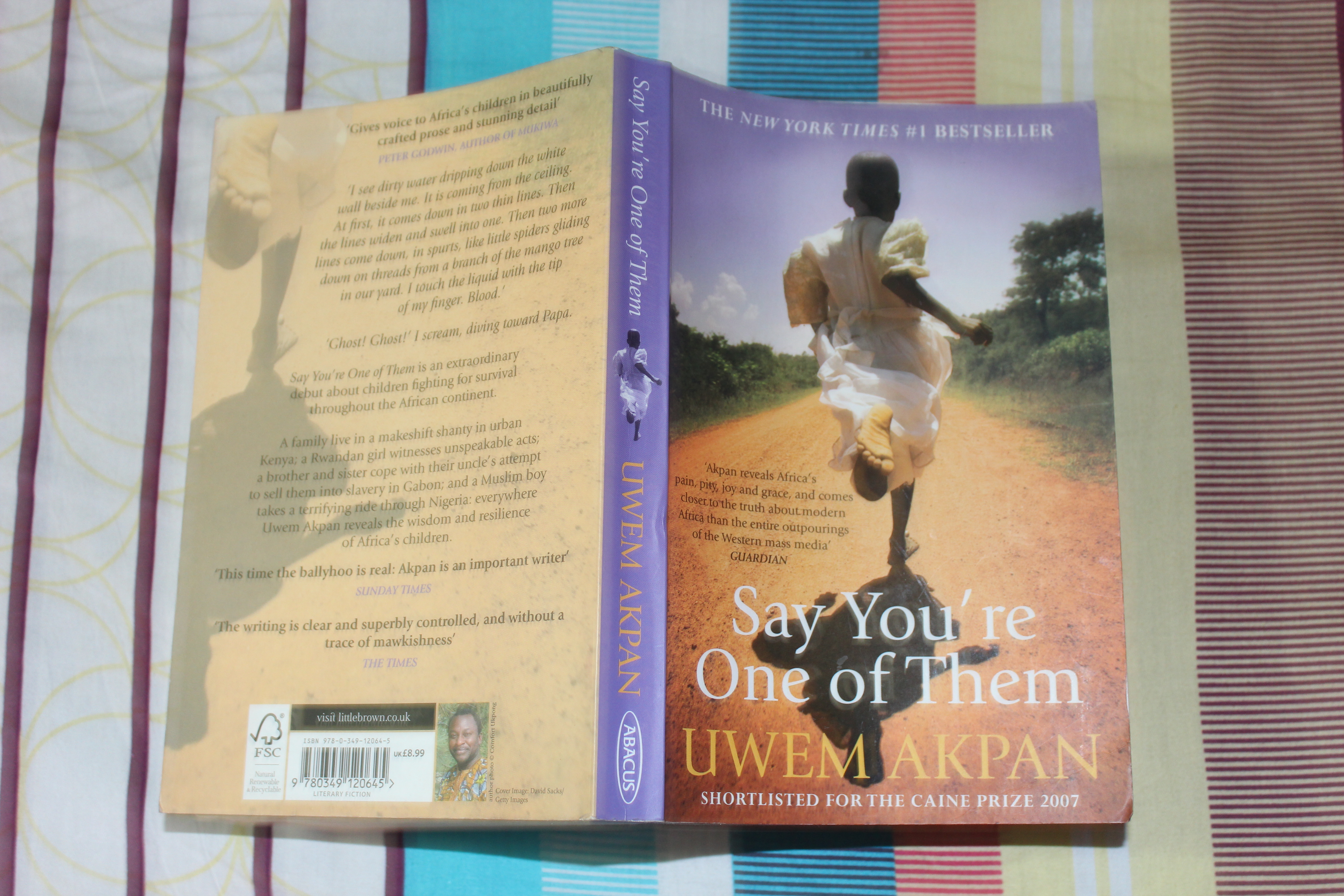 prostitution, and ethno-religious conflicts as it affects children in Ethiopia, Benin, Nigeria, Kenya and Rwanda. This writer shows that he is a man acquainted with grief as he portrays nuanced stories of Africa’s abused and battered children in a way that cuts close to the bone. Children in these stories lived struggling like ants whose holes have been blocked.  Their glory and resilience shines forth as their innocent spirits collides with unpleasant realities of culture, religion and social systems.
One other reason this may be a hard read especially for Non-Africans is the use of hybrid English and local terms which it adopts to give the dialogues a local flavour. However I recommend that everyone disobeys those that discouraged me and read this book. You will be confronted, challenged and bothered to your core. Finally, as the writer intended, it will leave you unsettled. But to experience all of this, you must exercise the patience of a still water; these stories are not fast paced, they unfolded slowly.
I am not sure how to fully express gratitude for this book. Uwem Akpan once said and I quote ‘I think fiction allows us to sit for a while with people we would rather not meet’. I agree with him; I would rather not meet Monique, Maisha, Jubril , Yusuf ,Jean and others because if I do, I cannot say I am one of them.
Written by ~ Adaobi Nkeokelonye