The Color Purple by Alice Walker

In Teenage Pregnancy, violence against women

I think it pisses God off if you walk by the colour purple in a field and you don’t notice it. By reading this book, I made God happy. The color purple written by Alice Walker was set in the time when Horses and their wagons gave horspitality. Then lived Celie and her sister Nettie, there were many Mr._____; Albert, Alphonso. There was Harpo, Sofia, Shug Avery and others. In those days, the enemy was not the horse thieves; it was Mr._____ .
Celie wrote many letters to God about the days of her life. Whether God will read her letter or No, Celie went on 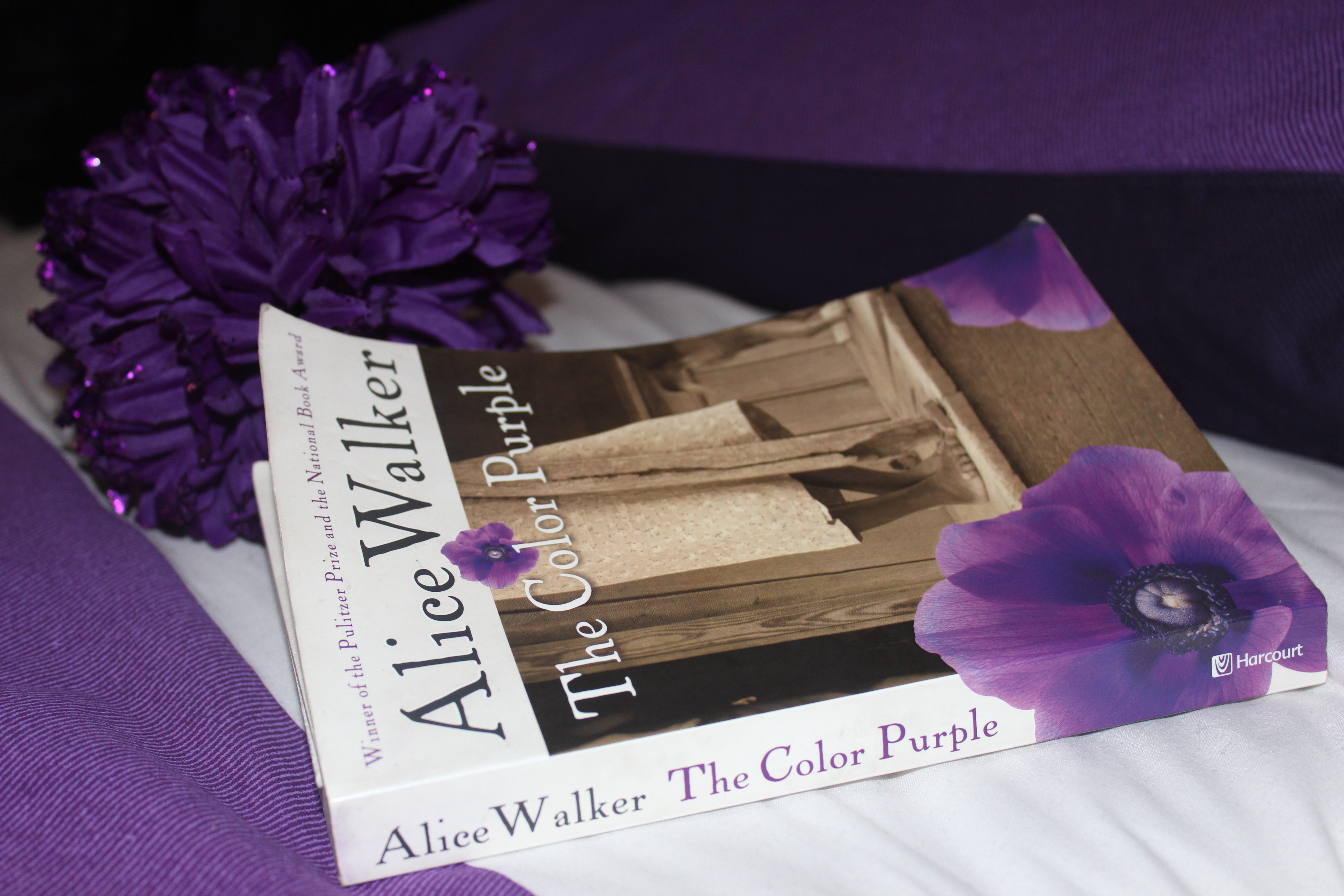 writing. She told God about Celie the orphan and Celie the mother of two children conceived with her father and later given out for others to raise. She told God about other people’s children she nursed; the good  and the bad ones, their good and their bad days. With hints of humor, she describes the children’s prevailing illness in winter, ‘they have flue , they have direar, they have newmonya,… twoberkulosis.
Celie shared her life as a victim of two Mr._____s . The parts of the story that constructs the character of Mr.____  stinks with all sorts of domestic violence; rape, battery, emotional abuse… She expresses this strand of theme as captured below.

‘Harpo ask his daddy why he beat me. Mr._____ say, cause she my wife. Plus she stubborn. He beats me like he beat children. He say, Celie, git the belt. The children be outside the room peeking through the cracks. It all I can do not to cry. I make myself wood. I say to myself, Celie, you are a tree. That’s how come I know trees fear man. 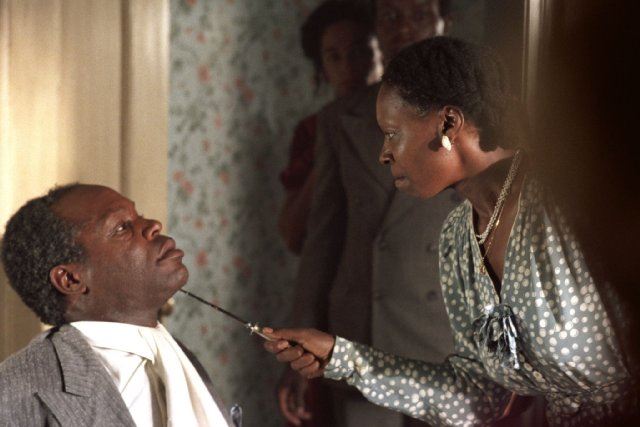 A scene from the movie ‘The Color purple’.

Using the Mr._____ without a name for a better part of the book can be further understood in her words ‘Most times, mens look pretty much alike to me’. This generalization raises the question on whether the male gender had a monopoly to the kind of violence Celie  experienced. I asked myself if violence was innate or socialized. Could men also be a victim of domestic violence? Could women like Celie who played victim also become enablers, reinforcing what they have been given trans-generationally?
My questions found answers in the arrival of Harpo’s wife Sofia who represents the defiant new generation of amazon sisters that are not shy or afraid to backtalk. Mr._____ advices Harpo to hit Sofia to show who got the upper hand. Celie surprisingly concurs to the idea that ‘Nothing can do that better than a good sound beating’. Sadly, the next day, Harpo returns back to them with a black eye and a silence which in a way highlights the silent crime of male abuse present in our society. After some confrontations, Celie confesses that indeed, ‘some women can’t be beat, Sofia one of them’.
Harpo feeling his body size made him weak to Sofia, is triggered to gluttony with the expectation he will get as fat as Sofia; but only his belly gets fat. Harpo and Sofia show that gender roles are indeed fluid. Though Harpo desires Sofia to be just a ‘wife’, she was instead the ladder carrying, roof nailing girl who hunts with bow and arrows and batters her husband deservingly. 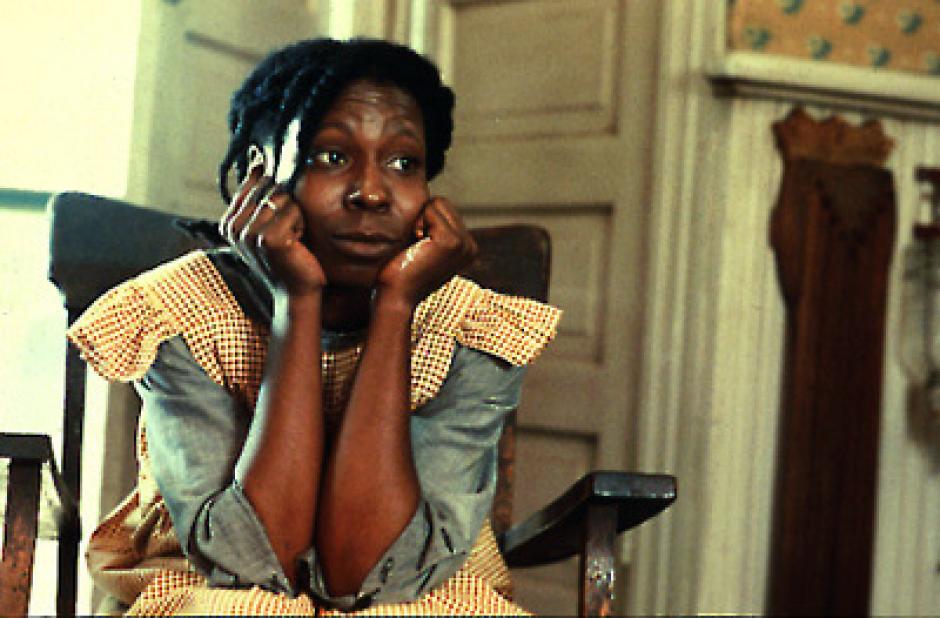 The character of Celie in the movie ‘The Color Purple’.

Harpo’s character breaks the bleak boundary of traditional gender roles. He questions the normative division of labour in an age where women were caught in the field cotton chopping, labouring all day tending their crops and praying.
Describing the impact of this intense work, Celie says ‘I’m roasted coffee bean colour now.’ This clearly makes a case time poverty, a concept that is not fully explored among women in developing countries. Celie could not even get time to see her fantasy superstar queen-honey-bee; Shug Avery, no matter how intensely she desired to.
In an ironic way, super star Shug Avery who also is the love of Mr._____ life, walks into Celie’s life sick with twoberculosis. Shugs presence created a paradigm shifts, an epiphany! Though a superstar, Shug is yet another human with life’s ravages. Unlike she appeared in the picture, she was only kinky haired, black as tar woman with legs like baseball bat. Thanks to her, the identity of  Mr._____ who Celie married is revealed as Albert. He is de-constructed with a display of all his weaknesses.
Celie nurses Shug to health and in return Shug protects her away from Mr._____ Albert’s violence. She gives her access to piles of letters from her only sister Nettie which Mr._____ Albert has hidden from her. Shug teaches Celie sexuality, empowering her with sexual and spiritual freedom. Through Shug’s character, the author re-constructs the identity of Celie‘s God sharing why sinners have more good time with less consciousness of the injected fear of God.

‘Shug say, Celie, tell the truth, have you ever found Godin church? I never did. I just found a bunch of folks hoping for him to show. Any God I ever felt in church I brought in with me. And I think all other folks did too. They come to church to share God, not find God.’

With Shug’s impact and influence, Celie finds the courage to question her relationship with a silent God she has written letters to all these while.

‘What God do for me?…Yeah ,I say and he give me a lynched daddy, a crazy Mama, a lowdown dog of a step pa and a sister I probably won’t ever see again. Anyhow, I say, the God I been praying and writing to is a man. And act just like all other mens I know. Trifling, forgetful and lowdown.’

Finally Celie’s life just began. In one sentence, she expressed the new dynamics. ‘Dear Nettie, I don’t write God no more. I write to you.’  Writing and reading and from Nettie her sister who is now a missionary in Africa served a window for Celie to learn about Africa and coincidentally how the children she assumably conceived through incest with her dad were doing now under Nettie’s care. She learnt about trains, ships, and slave trade which she could liken to the experience of Sofia eventually losing her freedom for five years in jail after fighting the white mayor; Sofia became a slave to Mrs Millie the Mayor’s wife.
Alice Walker showed a mastery of the language art with a seamless swing from uneducated Celie’s broken English to learned Nettie’s standard English. The stories are woven perfectly allowing most characters second chances in life. For many of them, life took them on full circles, sometimes returning them to relationships with the devils they left behind. In a moving reunion, the author brings to an end a life of absence between two sisters. 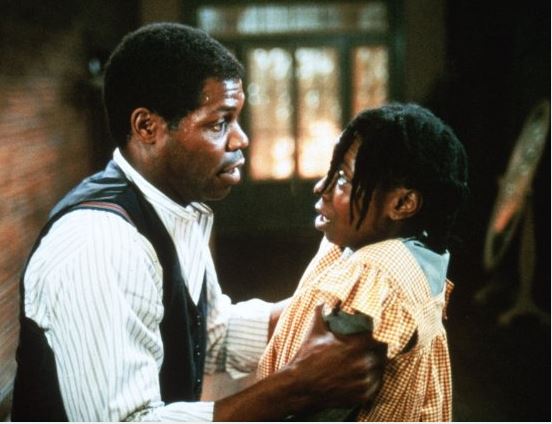 A scene from the movie ‘the color purple’.

I am not at all surprised ‘The Colour Purple’ bagged the Pulitzer Prize of 1983 and also won the National book Award. Doing a summary of this book is pure injustice to it, this evergreen book is wholesome. It addresses racism, sexism, and the social constructions of gender roles. It ruffles the normatives of organised  religion. It makes a perfect complement for discourses around gender based violence which CEDAW (Committee on the Elimination of Discrimination against Women) addresses. It recognizes violence as constituting a violation of women’s human rights; that is disproportionately directed against a woman because she is a woman or that affects women disproportionately. Alice Walker’s narratives resonates deeply with the understanding of violence as an act that inflict physical, mental or sexual harm or suffering, threats of such acts, coercion and other deprivations of liberty.
The Color purple  explores issues of identities, questioning all colour-based definitions of the African identity in the dichotomy between the descendant of African slaves seeking to lay claims on Africa like the Missionary Nettie and Samuel, and the people of Olinka who don’t accept them as Africans.
While examining rural development issues and the conflicts of imposed civilization, it also highlights the issues of unpaid work and time poverty; a concept least explored for women in developing countries. 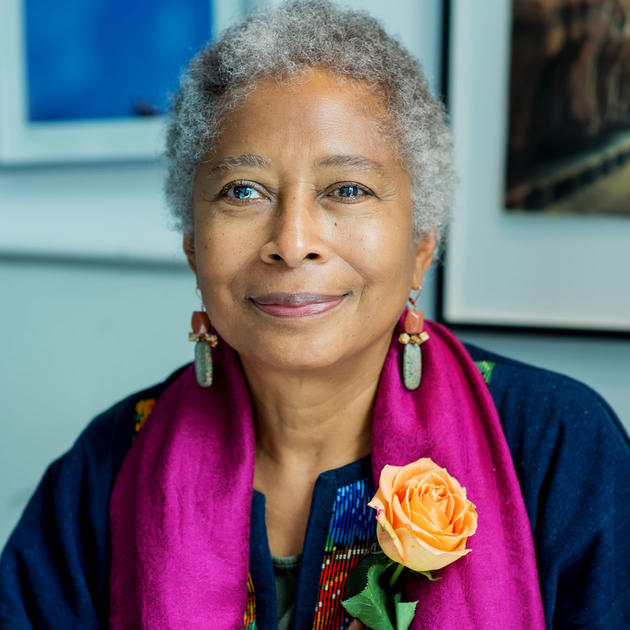 This epistolary novel published in 1982 made an indelible impact. It’s letter written format served as a great tool for communication and  reflective practices. Deservingly, the novel has been adapted into a movie which equally expresses the power to communicate the issues raised by the author.
To Alice Walker, I would have titled this book ‘A letter to God’ as your deconstruction of God remains the best gift I received from it; I learnt that God is inside me as me. I admire the spiritual awareness you have shared here. May you remain the Big Purple Flower in my hair.
Written by ~ Adaobi Nkeokelonye
Alice WalkerThe Color Purple

No Hoodie No Honey