My desire on my third visit to India was different; this time  I wanted to hear what the city of Delhi was saying, I wanted to listen to the road and hear what music the streets of Gurgoan danced to. I so yearned to feel the fabric of the people’s  character, their trade, the structures, systems and key socializations that made them shine and drove their development. As language often limited my interaction with the auto rickshaw-puller, the beautiful women with lowered gaze on the streets, the shop owners and the taxi drivers who mostly spoke Hindi language, I settled for observation and reading.  Beyond reading the Times of India, my other means of learning was their novels. I had made a few selection from suggested authors on my friend Harlene’s bookshelf.  It was considerably difficult picking a first read from  Amitav Gosh’s Rivers of Smoke,  Jhumpa Lahiri’s  The Lowland, Aravind  Adiga’s The White Tiger and  Yasmeen Premji’s Days of Gold &Sepia. 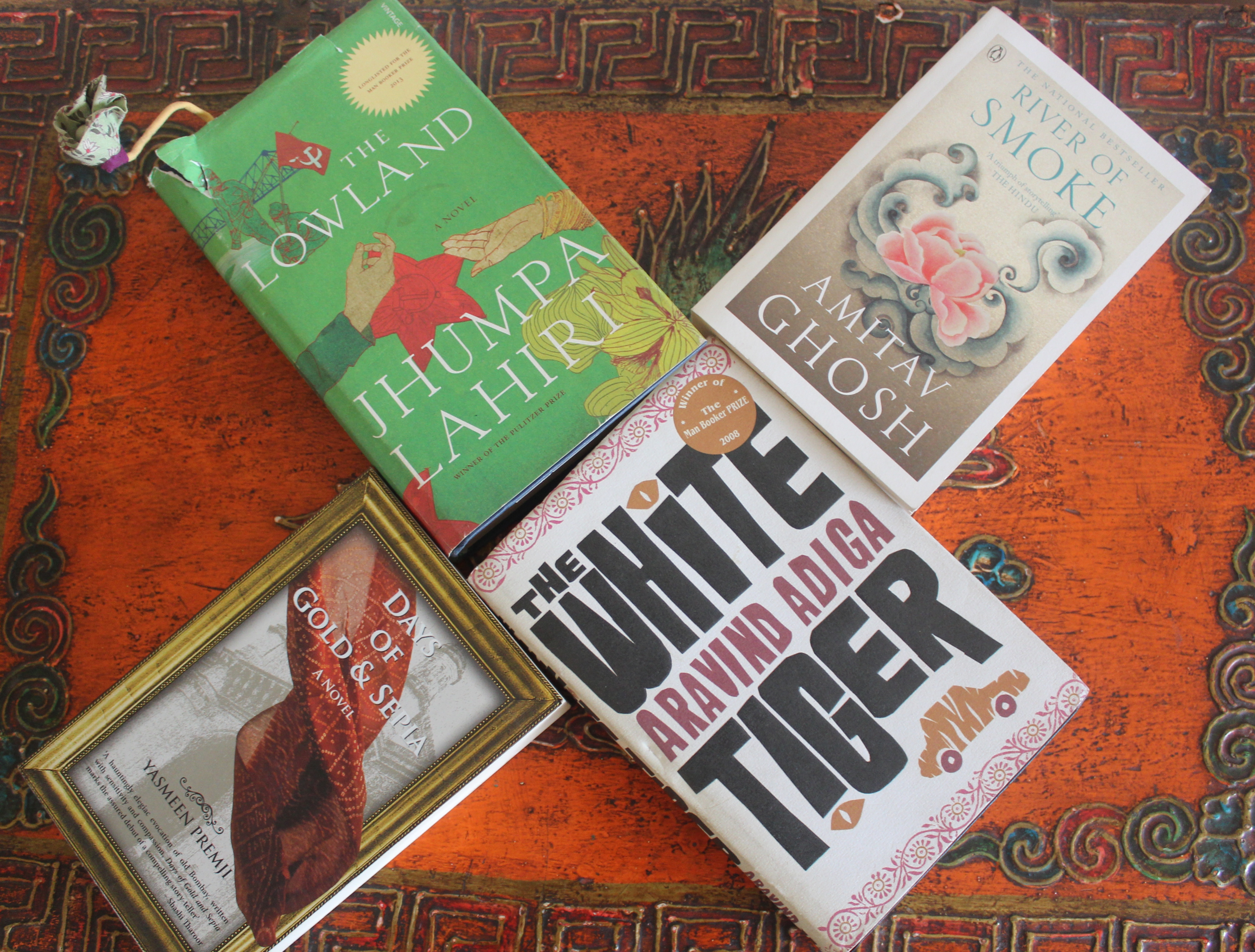 I had a hint that Aravind  Adiga’s The White Tiger was partly set in the city of Gurgoan, the bright and modern end of Delhi where I stayed, I couldn’t have made a better choice over what would help untangle my thoughts about this city whose air I was breathing and perhaps the mystery of the incredible India!
From the first page, I met the Protagonist Balram with the following profile:

Through a period of seven nights in which he serves as a midnight educator to the Premier of China-His Excellency Wen Jiaboa-who was visiting India, He gently disrupts the official national narratives of India which is presented to foreigners. With Black Humour and hilarious metaphors, drawing attention to contrasting issues in modern day India, he presents an India with stained sky and divided  against itself.

‘Please understand that… India is two country in one: an India of light and an India of Darkness….One thing about India is that  you can take almost everything you hear about the country from the prime minister, and turn it upside down and then you will have the truth…’

Balram’s India is that one country that takes on technology like ducks to water, where you can smell money in the air but yet the screwing of brides family in the name of dowry remains an integral part of its culture. Its the civilized country with rickshaw -pullers; ‘thin,stick-like men leaning forward from the seats of  bicycle with carriage, bearing a pyramid of middle class flesh , some fat man and his wife with their heavy grocery bag. In Balram’s words, ‘when you see these stick-men, think of my Father’.
Balram was born and raised in darkness. Dark was  the paradise of Laxmangarh with defunct electricity poles, broken water taps and ‘children too lean and short for their age and with oversized heads from which vivid eyes shine like the guilty conscience of the government of India.’  The Water buffaloes was the most important member of his family as they dictated the size of milk and money families got. Balram was his rickshaw pulling father’s ticket away from poverty. Having cut short his schooling to work and pay family debt, this ingenious, ambitious and resilient character with an entrepreneurial spunk ensured he did not sink in the mud.  His education continued in the tea shop where he kept spying, lingering and listening to customer’s conversations. Like a sponge, he absorbed all he heard. Then he learnt he could dream bigger to become a driver with a better income. In the caste-system adopting India where one’s surname tells his caste and determines his destiny, Balram’s surname ‘Halwai’ being of the sweet maker’s caste could not be a Driver.

This country in its days of greatness…was like a zoo. A clean , well-kept, orderly zoo. Everyone in his place…Goldsmiths here, Cowherds here. Landlords there. The man called Halwai made sweets. The man called cowherd tended cows. The untouchable cleaned faeces…women covered their heads with a veil and turned their eyes to the ground when talking to a strange man.

Driving was like impossibly getting coal to make ice. In his spirited way, Balram ensured that coal was eventually taught to make ice. Preparation meets opportunity as Balram whose destiny was to be a sweet-maker eventually becomes the Stork’s family driver, gets his dream Khaki Uniform like Vijay’s, and ultimately earns the title of Murderer as he killed the Stork’s  American returnee son Mr. Ashok.  He did not only slit Mr. Ashok’s throat as the Muslims kill chicken, he remorselessly stole his name to run a start up in Bangalore, finally becoming Mr. Ashok Sharma. All of India’s skin whitening cream  couldn’t clean his hands now.
Being a self-acclaimed half-baked Indian, he titled his story ‘the autobiography of the half-baked Indian’ Balram defines the full-baked Indians as the ones who after 12years of school and three years of university, wear nice suits, join companies, take others from other men for the rest of their lives. While the Half-baked Indians like him and thousands of others in India are those who were never allowed to complete their schooling, whose role models were bus conductors like Vijay, tea sellers and rickshaw pullers but yet the Indian ENTREPRENEURS ARE MADE FROM HALF-BAKED CLAY like him.
Even in his dark and small village of Laxmangarh, he highlights capitalism as it exists also among the poor in Laxmangarh where characters like ‘The Stork‘ owned the river that flows outside the village and took a cut of every fish caught by fishermen therein. Stork’s brother Wild Boar owned all good agricultural land around Laxmangarh. If you wanted to work on those lands, you bow down at his fit.
Balram humorously discusses India’s religious background; In a world with 36,000,004 Gods foisted on us, ‘the Muslims have one God , the Christians have three Gods … the Hindus have 36,000,000 gods, all of which are divine asses he should choose from. ‘These Gods seem to do awfully little work-much like our politicians- and yet they keep winning elections to their golden thrones in heaven, year after year.‘ 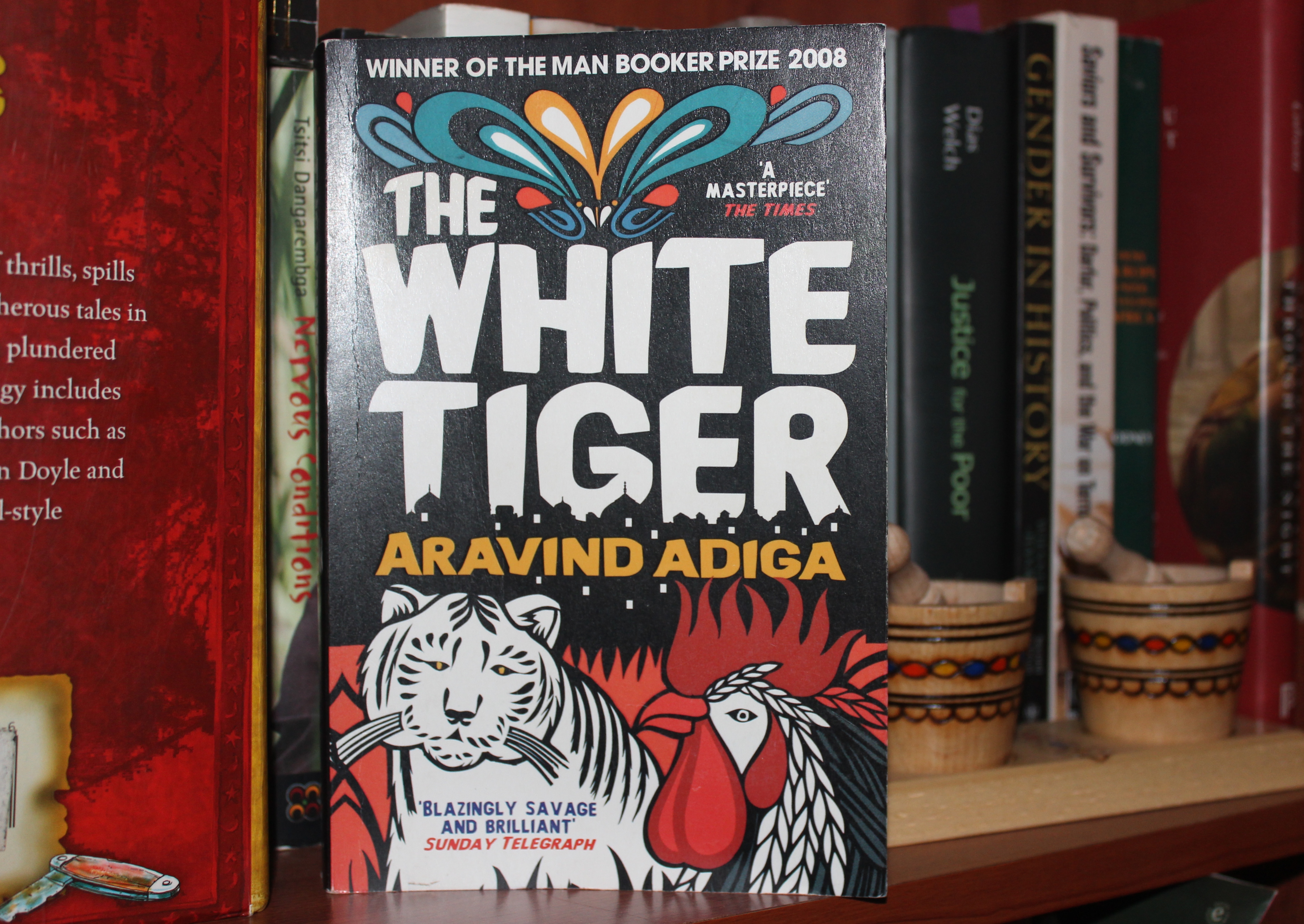 Aravind Adiga’s White Tiger deservingly won the Man Booker prize of 2008. With his pen, this writer dissolved the super-power India, stripping away façade of a rising India. This author with his mordant wit presented an India that is in a catch-up relationship with China, with an admiration for all things America, thereby questioning the validity of the Indian dream. There is the American dream, but what is the Indian dream?
The story of a poor man’s life is written on his body in a sharp pen, this is true of Balram’s story. Generally, The White Tiger tells of how the Indian entrepreneur is fostered to success through labouring for pittance, it also narrates how a young boy is corrupted from a sweet innocent village fool  into a citified fellow full of debauchery, depravity and wickedness.
This compelling novel taught me something,’You always ought to talk about a man’s education when describing him‘, You cannot expect a man in a dung heap to smell sweet.
Written by ~ Adaobi Nkeokelonye