Memoirs of a Geisha shares the journey of how Chiyo-Chan, the young girl from the Seashores of Yoriodo, born in the year of the monkey, with so much water in her personality became Nita Sayuri the renowned Geisha of Gion in Japan. The Fisherman’s daughter from the little dump village of Yoriodo which had no glamorous spot, will as a child, with her father’s consent and Mr. Tanaka’s support, be bundled with her elder sister Satsu, away from their little tipsy home by the cliff, into a new place where they knew no one. 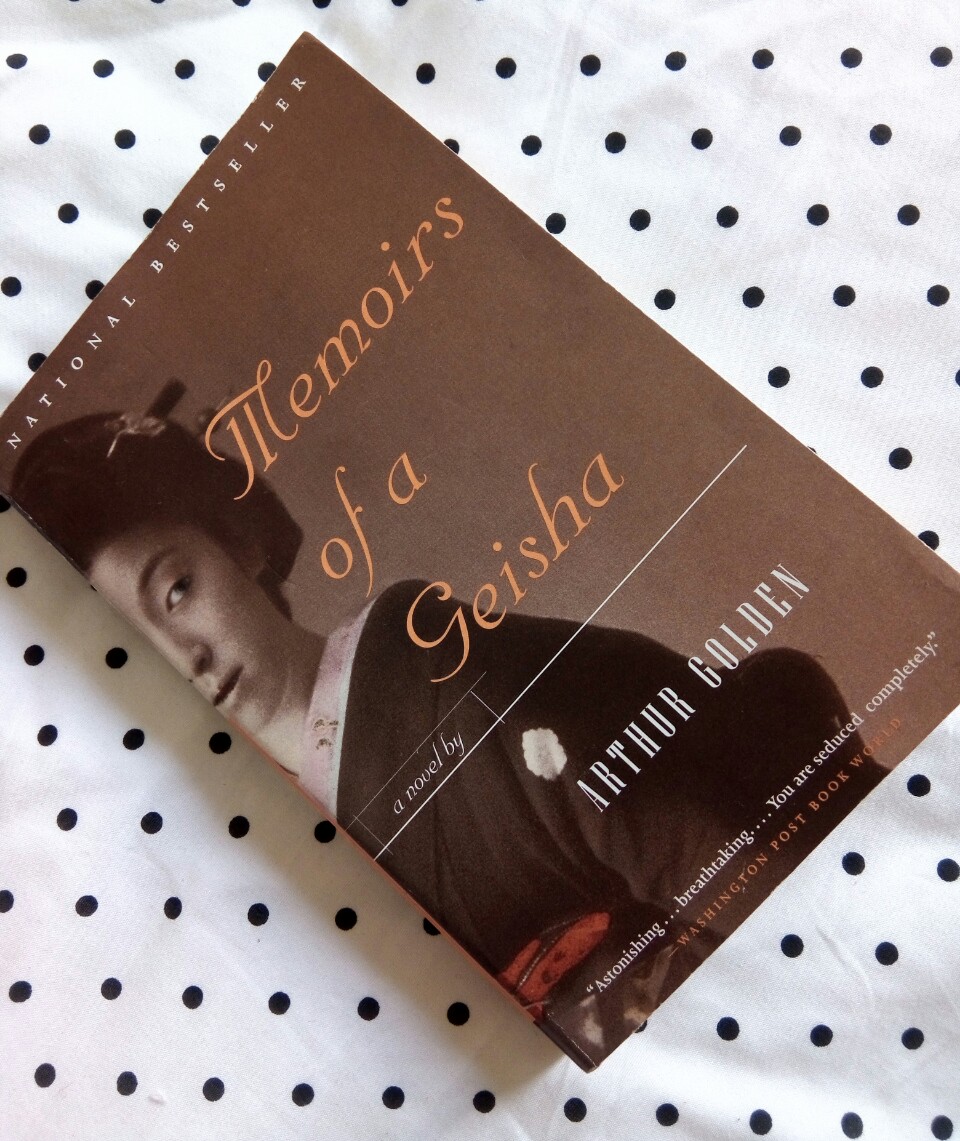 Nine years old Chiyo is astonished at her first glimpse of city light, and right under the puddles of yellow glow in the city of Kyoto, she is forcefully separated from Satsu. Unlike her sister, Chiyo’s translucent gray eyes got the fascination of everyone and defined her destiny; Satsu was taken to Miyagawa-cho, a home for prostitutes, while Chiyo ends in the Nitta Okiya, a place where Geishas are nurtured.
An earlier visit to Mr. Tanaka’s home in Senzuru had unknowingly given Chiyo a peep into her future, but little did she know that the beautiful woman in pink kimono with an obi tied around her middle, entertaining men in the teahouse in Senzuru, was nothing compared to the sight of the exquisitely beautiful woman that will welcome her in the Nitta Okiya. Meeting more elegantly dressed women like Mother and Granny, and then a little girl of her age Pumpkin further puzzled Chiyo to seek knowledge on where she found herself.

‘May I ask, ma’am…what is this place?’
‘It’s an Okiya…It’s where Geisha live. If you work very hard, you’ll grow up to be a Geisha yourself.’

In the Nitta Okiya, Chiyo became the most junior of cocoons. She was exposed to store house of Kimonos so expensive they could buy the whole village of Senzuru and Yoriodo where she came from. But such exposure to wealth, beauty and glamour like she had never seen before did not take her heart away from home. Being sent out into the world isn’t necessarily the same as leaving your home behind you. Daily, she thought of her sick and dying mother, of Satsu who she misses, and her father who sold them for money. The hatred of Hatsumomo and everything that made her life more difficult strengthened her determination to run away.
Though at this time, Chiyo had commenced her schooling to become a Geisha with Pumpkin, a brief reunion with Satsu (who now worked as a prostitute) led to their hatching an escape plan. Daily Chiyo planned how she would escape through the roof in the Okiya to reach the Minamiza theatre where Satsu was waiting as planned. A broken arm from her roof fall spoiled it all, Chiyo was brought back to the Okiya and made to understand that her burden of debt just increased.

‘Do you know how much I paid for you?’ Mother said
‘No, ma’am… But you’re going to tell me you paid more than I am worth.’
‘You are right about that!…Half a Yen might have been more than you’re worth….I paid seventy-five yen for you, that’s what I paid. Then you went and ruined a kimono, and stole a brooch, and now you’ve broken your arm, so I’ll be adding medical expenses to your debts as well. Plus you have your meals and lessons, and just this morning I heard from the mistress of the Tatsuyo, over in Miyagawa-cho, that your older sister has run away. The Mistress there still hasn’t paid me what she owes. Now she tells me she’s not going to do it! I’ll add that to your debt as well, but what difference will it make? You already owe me more than you’ll ever repay… I’ll suppose you could repay it after ten or fifteen years as a Geisha,…if you happened to be a success. But who would invest another sen in a girl who runs away?’ Mother said.
‘Throughout my months in Gion, I’d certainly imagined that money must have changed hands before Satsu and I were taken from our home. I often thought of the conversation I’d overhead between Mr. Tanaka and my father, and of what Mrs Fidget had said about Satsu and me being “suitable.” I’d wondered with horror whether Mr. Tanaka had made money by helping to sell us, and how much we had cost. But I’d never imagined that I myself would have to repay it.’

Hence, she wallowed in an overwhelming feeling of despondency. In Aunty’s words,
‘You’ll never be a Geisha now!… I warned you not to make a mistake like this! And now there’s nothing I or anyone else can do to help you.’ 9yrs old Chiyo was hereafter condemned to the drudgery of a maid for trying to run; ‘I was living only half in Gion but the other half of me lived in my dreams of going home.’ A letter from Mr. Tanaka changed her horizon forever.

‘Dear Chiyo,
…Six weeks after you left for your new life in Kyoto, the suffering of your honored mother came to its end, and only a few weeks afterward your honored father departed this world as well…Your sister, Satsu, came through Yoriodo late this past fall, but ran away again at once with the son of Mr. Sugi…’

To learn in a single moment that both her mother and father had died and left her, and her sister too lost to her forever, made her mind feel like a broken vase that would not stand. In the years to come, her life was like a big bee in a jar, circling and circling with nowhere to go. It wasn’t worth it thinking of a sister she lost, a mother whom she hoped was at peace in paradise and a father who’d been so willing to sell them and live out the end of his life alone. Chiyo had no choice but to begin negotiating her past and future.

‘The stale air had washed away, the past was gone. My mother and father were dead and I could do nothing to change it. But I suppose that for the past year, I’d been dead in a way too. And my Sister… yes, she was gone; but I wasn’t gone. I’m not sure this will make sense to you, but I felt as though I’d turned to look in a different direction, so that I no longer faced backward toward the past, but forward toward the future. And now the question confronting me was this: What would that future be?’

The gods will smile on her and she experienced the kindness of strangers like the Chairman, Nobu and Mameha, with the chairman playing a small-god designing the architecture of the rest of her life. Under Mameha’s nurturing, she resumed her lessons as an apprentice Geisha, learning that though some where born into the lineage of Geisha, others were forced into it:

Dance is the most revered of a Geisha’s art, Chiyo mastered it along with the tea ceremony, flower arrangement. She learnt to always look pretty and alert, to wear the Okobo as though it was her feet’s glove, mastered the shamisen and regalia of the apprentice geisha until it was no longer cumbersome, and elegantly displayed the momoware. On the day of her debut ceremony, like a caterpillar turns to a butterfly, little Chiyo died and a beautiful Geisha named Sayuri was born. As the seasons changed, she ruled over Hatsumomo as she became the adopted daughter of the Nitta Okiya. Sayuri Nitta became one of the twenty greatest Geisha of Gion’s past, for almost three decades, she mizuage set an unbeaten record in Gion.
While Sayuri’s story had somewhat of a happy ending as she remained drowned in beauty, but that is not the case for other Geisha’s like Hatsumomo. Unlucky Geisha’s end up as prostitutes or drink themselves to death. Such is a reality that makes being a Geisha not sustainable and more so continues to raise the question on whether beyond class and artistic skill, if there really is much moral difference between the Geisha that ties her Obi to the back and the prostitute that ties her Obi to the front? The two have a lot on in common; they become geisha or prostitute because they mostly lack choice, they become play things of men in power, their success and survival is dependent on their ability to entertain men and get paid or kept for it.
Looming over this fiction novel was the mood of the Nation during the Allied Occupation in Japan. Sayuri sprinkled stories of the second war until the impact of the war hit Gion and resulted in the closure of all Tea houses, rendering both the Geisha’s and Prostitutes to a life of helplessness. Kuraitani as they called the years of the great depression was a valley of darkness, a decade of crushed hopes. Through her narratives, we feel what happens to citizens when a country goes to war. War was indeed a leveler, it turned some Geishas to prostitutes and factory workers. It turned appliance manufacturers into builders of fighter airplanes, and more so Kimono makers into parachute makers. Left with Ghostly memories of Gion, Sayuri survived making parachutes. The reopening of Tea houses at the end of the war was marked with symbolisms; shoes of American Soldiers had replaced the usual rows of men’s shoes which the Geisha’s were used to. And once again the Geisha’s took their place as a National Treasure.

Authur Golden’s novel Memoirs of a Geisha hit so many notes on themes relevant to the International development sector. First is the narrative of Gender, projected by Income Inequality which reinforces the culture of Geisha. There was not a single story in this book about any woman who saved herself, or lived independent of men’s mercy. The theme of Poverty provoked by the war and more by the rural/urban dichotomy is noted. Next is the concept of Vulnerability expressed by the Geisha’s and in the character of Satsu and Chiyo, whom as vulnerable children were sold into a life of slavery. This singular act of selling the two sisters for cash by their father understood as Child-trafficking, and Satsu’s purchase by Sex Traffickers, likewise Chiyo’s purchase as a maid and then a Geisha who is enslaved to generate income for the Okiya, remains a foundation of core problems which many development institutions are positioned to solve. Reports on Trafficking in Persons show an increase over the years, specifically, trafficking women and children for sexual exploitation is the fastest growing criminal enterprise in the world.  2017 Estimates referenced to the International Labor Organization, 24.9 million victims are trapped in modern-day slavery and 4.8 million (19%) people  are trapped in forced sexual exploitation globally.
In appreciating Arthur Golden’s contributions to relevant development discourse, I could not help imagining the many Chiyo’s and Satsu’s in different parts of the world, who continue to dream of freedom, on how they wish daily that time runs backward while dealing with the difficulty of running away. To these ones, I wish the kindness of strangers, and the experience of knowing that something besides cruelty can be found in this world. May the next turn of life’s wheel bring to them freedom.
~Adaobi Nkeokelonye