Spiraling violence between the Fulani herdsmen and different communities in Nigeria; especially farming communities, aroused my need to understand the socio-economic culture of the herdsmen. My search to learn more of what fabric the Fulani’s, the most dispersed and culturally diverse people in Africa were made of, led me to the Burning Grass. 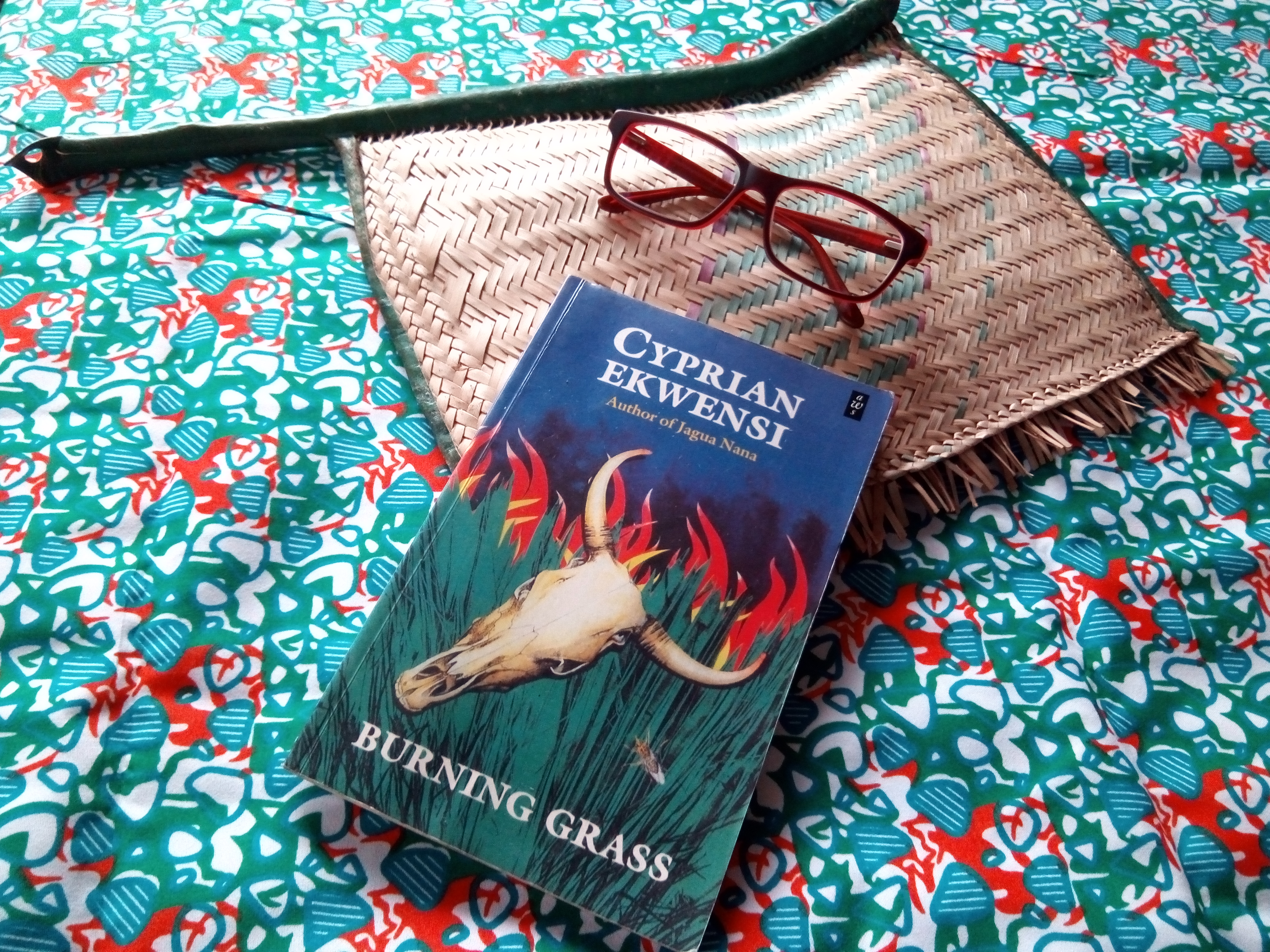 In this Novella, the narratives of Mai Sunsaye, the chief of Dokan Toro did not disappoint me. Many of the details he gives of the Fulani herdsmen, serves to understand their socio-economic pattern, and why town dwellers and the nomads continue have conflicting relationships.

‘Understand this: We Fulani’s do not like you town dwellers. We love simple life which makes men free and brave and gives women a strong position. Can you understand that?’

For all the years he has lived with his most cherished identity as a Fulani, Mai Sunsaye can tell from nature when it is was time to move South or North. Sitting beside his quiver full of arrows, he smelt the smoke fumes in the air and he knew it was of the burning grass: when the grass begins to burn, it is time for the herdsmen to be moving the cattle southward, to the banks of the great river.
Days are, when they move to escape the tax collectors. But when Mai Sunsaye moved on this faithful day, it was not to escape the tax collector, it was at the order of the Sokugo; ‘the charm of the Fulani cattle men; a magic that turned studios men into wanderers’. This charm that infects its victim with a wandering disease sent by Sunsaye’s enemy Ardo, has been brought upon him by the grey-breasted Senegal dove trailing a talisman.
Unbeknowest to Mai Sunsaye, following the bird’s movement would mean deserting his sense of reason, his wife, his children and his people.When asked about his wandering, Sunsaye will tell anyone that cared to listen that he was in search of Fatimeh, the Kanuri slave girl whom he saved from her masters. Fatimeh was caught up in a love triangle with Sunsaye’s love sick son Rikku and Hodio whom she eloped with. All Sunsaye wanted was to bring Fatimeh back to his most loved son Rikku. But in his search for one, he finds another.
In the course of his journey, Mai Sunsaye opened a window for readers to view the nomadic life of the Fulani. Through lonely hills, rivulets and rocks, the herdsmen will thrive. Loneliness was their drink, they are nomads; wandering cattlemen and women.  As their families are scattered beneath different piece of sky in their moving lives, it is little surprise that Mai Sunsaye walks into the embrace of his first son Jalla who has now grown rich with a thousand cattle in the town of New Chanka.

This picture of grazing Cattle was taken in the Mambilla-Plateau area of Nigeria. The Fulani herdsmen and their Mambillas  in Sardauna Local Government Area of Taraba remain in conflict over land dispute, farming and grazing route.

Mai Sunsaye also wanders into the home of his lost son Hodio who informs him he had lost Fatimeh in the process of eloping and then snatched his other brother Jalla’s betrothed Amina to be his wife. More painful for him is the news that Hodio quite the Nomadic life and settled into sugar making.

Sunsaye shook his head disapprovingly, ‘You have given up cattle For this? You whom I brought up with the cattle in your veins?’
Hodio laughed ‘The choice was made for me, after what I had done to Rikku and to Jalla.’

In Sunsaye’s absence, his enemy Ardo becomes Chief, rustles his cattles, burns his home and made of his wife and remaining children Rikku and Liebe wanderers. At the urge of the sukugo spell which he was still under, his wandering sickness finally leads him to the Legendary Wild Woman. She was known to always dress in white, leading white cattles with a lion beside her. Alas she was Fatimeh! He is excited, likewise her. She quickly cures him of the wandering disease.
Back to his senses, Sunsaye was able to gather the broken remnants of his family and also restore his chieftancy. But when love sick Rikku and Fatimeh reunites as Mai Sunsaye had hoped for, things were different as even love can wander away. In the time they were apart, Fatimeh had brought forth twins and therefore was now a free-born who is free to marry, but the love Rikku had for her was no more.
In Sunsaye’s words, ‘on the day of death, there is no medicine.’ After gathering his family round the fire again; each telling what they had seen and heard since their separation, Mai Sunsaye died.
Like the author Cyprain Ekwensi, the colorful nuggets of information the character of Mai Sunsaye gives on the Fulani’s helps in understanding their uniqueness. Through him, we learn about the life and values of the Fulani herdsmen:

‘We are fulani’s , the son of Dan fodio, master magicians, we who fight like cats , who die a hundred deaths and live, we who test out manhood by the Sharro’
‘we are men of cattles, our cattles come first and since it is our wish to take them to better pastures, all else must succumb to that wish.’
‘There is that immediate instinct of the Nomad, developed over a lifetime of exposure to danger from man, beast and nature.’
‘A good herdsman must know each one of his cattle by name, colour and habit: the Fulani does.’
They could ‘eat kneaded flour in sour milk’ and other things but ‘Fulani would not eat the meat from cattle: it was forbidden by the herdsmen.’
‘A town must have the smell of a cattle to please a Fulani. If there is no smell of a cattle-dung, it’s like a hospital.’
‘Most of the Fulani girls were lightskin with straight noses and thin lips like those of the white people; they could milk cows, separate butter and cheese from the milk, ferment the milk and cook. She hawks the sour milk.’
‘A Fulani youth who had not taken a flogging at the sharro would never find a maiden to marry him’
Their ‘Custom says that a woman is no wife until she is brought under a hut.’
‘To the herdsmen who has spent most of his time on the move, home was a cluster of huts, anywhere from which no more movement was contemplated.’

Reading this book, I could hear the footsteps of Fulani boy taking that trek that will prove him a man. I could see the jaws of cow grinding their cord, I could almost hear the hoots and guffaws of the herdsmen, the clashing of horns. In this book, people and places were so alive.
Written in 1962, the author Cyprian Ekwensi impressed me again. Just like in his novel ‘Jagua Nana’.  I think I love stories where women not only save men but save themselves. The gender balance in this book is commendable. With characters such as Ligu the champion cattle grazer and Fatimeh the legendary wild woman, The Burning Grass became a story, not just of cattle men, but of cattle women too.
This enthralling story set in Northern Nigeria not only gives insight into understanding this ethnic minority group holding the largest pastoral nomadics in the world. The story helps one to understand the incessant conflicts between the nomadic herdsmen and the town dwellers currently on the rise.
Details given in the Burning Grass helps shed light on why since 1987, ‘nomadic school’ educational projects of Nigerian governments targeted at millions of out of school children of Fulani herdsmen has failed. Herdsmen continue to display apathy towards these government driven educational projects. Though language may serve as an impediment, there is also the lose of grazing areas which may make it impossible for nomad children to negotiate herding and schooling within the same space.
The nomadic Fulani’s until present day remains challenged with incidence of cattle rustling, conflict, rural banditing, animal diseases among others. As Mai Sunsaye said, ‘we (Fulanis) are men of cattles, our cattles come first and since it is our wish to take them to better pastures, all else must succumb to that wish.’ Perhaps in teaching them how to grow their cattle sustainably and make their young increase, we may finally begin their education.