God Dies By the Nile

In Fiction, violence against women

Nawal El Saadawi showed me how what was once a beautiful cup can suddenly become shattered fragments of porcelain. Her novel God Dies by a Nile opens with Zakeya learning that her niece Nefissa the daughter of her brother Kafrawi had vanished. She was only 12yrs old when she was forced to go work in the Mayor of  Kafr El Teen’s house. Poor Elau is accused of assaulting her and innocent Kafrawi is framed for killing Elau. But for Kafrawi, Elau was a good man, he could never kill him even though he was found near his body.

After Nefissa goes missing, in Kafr El Teen an unknown girl gives birth to her child and abandons it in front of the home of the childless village Sheik Hamzawi and his young wife Fatheya. Being married the fourth time to young Fatheya whom he takes forcefully against her will in spite of his virility which he patches up with potion, Shiek Hamzawi saw the abandoned baby boy as an angel from God, but for the Chief of the village guard, why could it not be the son of the devil?

The revered Mayor of Kafr El Teen, Sheik Hamzawi, Haj Ismail, Sheik Zahran and their likes were the men who preserved the holy mosques, they were the men who watched over the morals and ensured the piety of the village of Kafr El Teen was intact. But to them, forcing innocent girls like Nefissa, her sister Zeinab and Fatheya out of her cradle into marriage or raping them was not immoral.

‘How exciting these simple girls are, how pleasant it is to take their virgin bodies into one’s arms, like plucking a newly opened rose flower. How I hate the false sophistication of Cairo women, like my wife with her brazen eyes. Nothing any longer intimidates or thrills her. Her frigid body no longer quivers when I caress her, or hold her tight, or even bite her’.

Voices of young beautiful women silenced by their Guardians; fathers and brothers, fill this book. Men who needed potions and amulets to patch their virility take glimpses at the supple bodies of young girls and gleam with unsatisfied lust, not even the God in the Misbahah prayer bead running uninterruptedly through their fingers could stop them. They all fed on the body of young girls like a group of starved men gathered around a lamb roasting on fire. 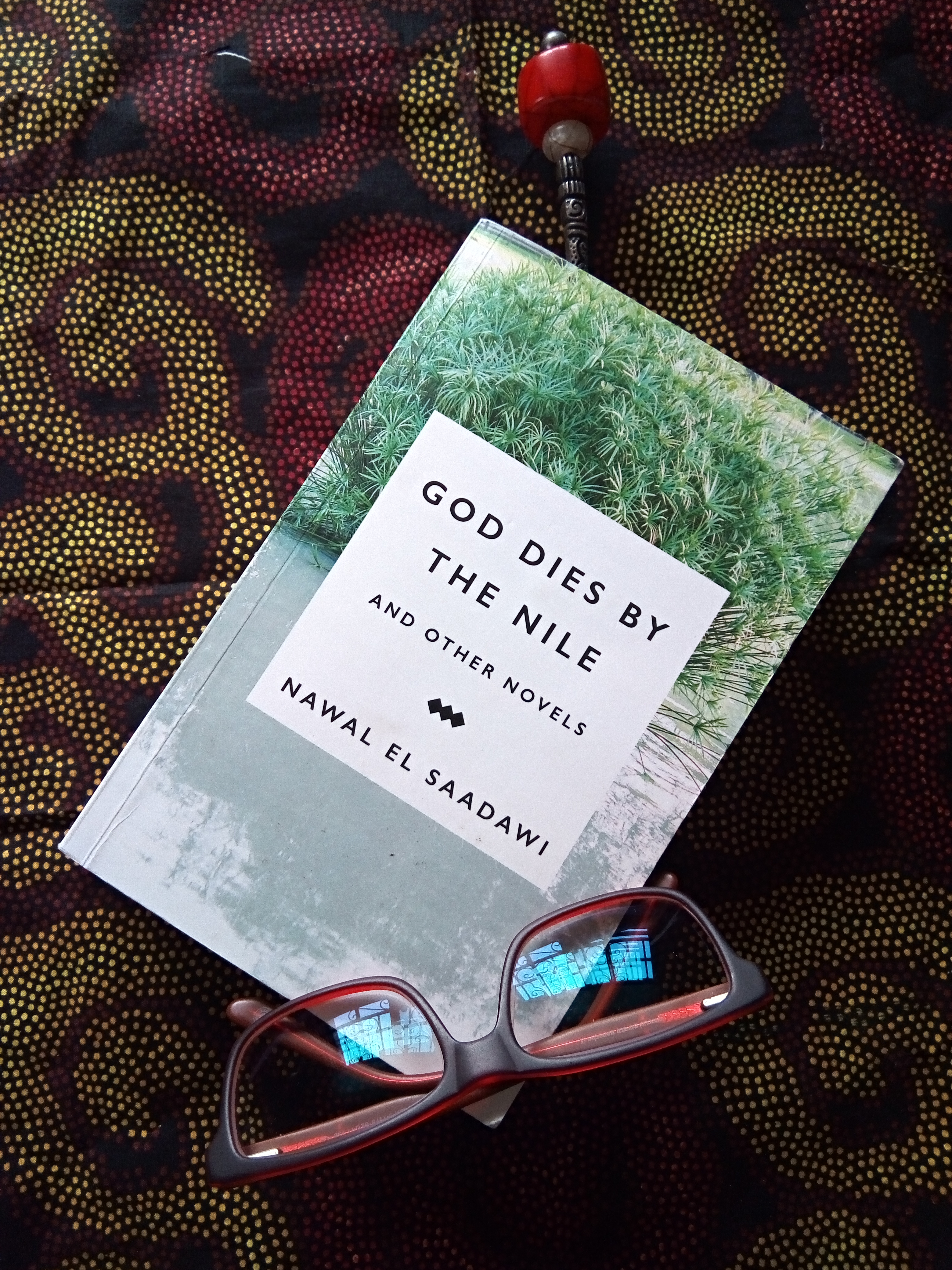 For the married Mayor who had the whole village enslaved, he was beyond suspicion and nothing could stop his lust for any woman. Unfortunately, he’s got a taste for women, he hunted the most vulnerable of them. After Nefissa vanished from working in his house, his eyes were now set on her sister.

‘And if he likes a woman, he can’t forget her. You know he is pretty obstinate himself. Once he sets his eyes on a woman, he must have her, come what may… he burned for such a desire for Zeinab that only death could put an end to it. Sooner or later, he was going to lay his hands on her, for like all Gods he believed that the impossible did not exist.’
‘Do you know he does not sleep because of Zeinab? I have done my best to convince her but she still refuses.’

Fatheya’s will may have been broken on marriage but not on motherhood. She quickly took in the abandoned child born in sin into the home she shared with Sheik Hamzawi. Though the presence of this sinful son of fornication ruffled the village and threatened the position of Hamzawi as Sheik in the village mosque, it did not stop Fatheya from holding on tightly to the child clamped to her breast even when she could see the danger hovering around them.

‘The Mayor has removed Sheik Hamzawi from his job and has appointed another Sheik in the mosque…The worm has eaten our cotton, and we’ve had nothing but trouble since Sheik Hamzawi gave shelter to that child of sin in his house. How can we allow a man who adopts the children of sin and fornication in his house to lead us in prayer?’

In the days to follow, when the wind started to blow, and carried a spark from an oven unto one of the roofs, igniting flames that spread through the village. Fatheya’s child was the accused. Every effort by the wrathful voices and the big rough hands to wrench the child away from Fatheya was in vain even to death.

‘In a few moment, Fatheya’s body had become a mass of torn flesh and the ground was stained red with her blood… His (Hamzawi) eyes were fastened on the naked body of his wife lying on the ground high up on the bank of the river… they carried her as her as the house, and on the following morning buried her with the child held tightly in her arms.’

When Fatheya died, God also died by the Nile. Then the impossible began to happen as the long lost Galal returns from Sinai to seek out his beloved Zeinab who was betrothed to him and ask after his cousin Neffisa and his Uncle Kafrawi whom had all fallen victim to the greed and lust of the revered Mayor, a man who walked the earth like God. Since the day Galal defied the Mayor and married Zeinab, the threatened Mayor unleashed his evil, sending Galal to goal prison, just like he did to Zeinab and Neffisa’s father Kafrawi.

For Zakeya who had lived to see the Mayor take her Brother Kafrawi to goal, and forcefully take his two beautiful daughters Zeinab and Neffisa, sending her long lost son Galal to Goal was the last straw.

‘She opened her mouth wide and started to scream and to wail in a continuous high-pitched lament, as though mourning the suffering of a whole lifetime suppressed in her body from the very first moment of her life when her father struck her mother in the head because she had not borne him the son he expected. It was a wail that went back, far back to many a moment of pain in her life… To the time when Om Saber forced her thighs apart and with her razor cut off a piece of her flesh. To the time when she developed two breasts which the menfolk would pinch when there was nobody around to prevent them. To the time when her spouse Abdel Moneim would beat her with his stick, then climb on her and bear down on her chest with all the weight. To the time when she bore him children and bled, then buried them one after the other with the dead. To the time when Galal put on his army uniform and never came back, and the time when Neffissa ran away… to the time when the car came to the village carrying the gentlemen from the town and the dog, then took Kafrawi with them and left. Her wail went back and back to such times and others she could not forget like the lament which has no end, and sees no end to all the pain in life. It seemed to be as long as the length of her life, as long as the long hours of her days and nights.’

Vengeance was her’s when she crossed the huge iron gate of the Mayor’s house that night with a hoe that ended the Mayor’s life. With a blow from the hoe crushing his head,  Zakeya’s act of murder became Allah’s choice. And from that moment he was destined never to see, or feel, or know anything anymore.

Published in 1985, I got to read this book in the wake of Hollywood’s Harvey Weinstein’s scandal. Through each page of this commendable novel, set in an Egyptian Islamic village, I thought about how it unraveled the abuse of women in Muslim communities. I could imagine that Zakeya’s wailing could be relatable and yet muffled for many women. As the global effect of the #Metoo anti-sexual harassment campaign was felt, I wondered if the echoes of #MeToo could someday pierce through walls of muds Fatheya knelt within praying the words of Allah as the hands of Sheik Hamzawi crept between her thighs. Could it penetrate the dark rooms, pound at the high brick walls and iron gates of the Mayor’s house and break out in the Mosque? Could the voices of women resound the #MeToo like the call for prayers? If and when that happens, will they get people stand behind them like they stand behind the Sheik?

In the months gone by, few discourses on whether the  #MeToo movement is a West Only movement has got responses in the call to talk about sexual misconduct among Islamic preachers, and to call out the Harvey Weinstein of Islam. But I still wonder if #MeToo will eventually be a word that vulnerable people world over can use; like Fatheya, can women in marriages also say #MeToo?

The Extinction of Menai