…but we forgot them

Driving through the Lagos morning traffic in a rush to catch the first presentation slot in an on-going training, I mulled over what would make for a perfect icebreaker for our calibre of participants. I needed a reflective question that would set the mood.  A glance at the newspaper right next to me caught my attention. ‘Today in History’ the title read. Thinking about today in history brought back some sad and pleasant memories. It’s the birthday of Victoria Nwogu, my sister and friend. It would have been the 71st birthday of Dr. Bitrus Gani-Ikilama whose life remains remarkable for his contribution to the well-being of blind and disabled persons in Nigeria.  But overwhelmingly it was an anniversary of an incidence we must never forget.
On February 25th 2014, gunmen from Islamic insurgency groups Bokoharam barged into a school overnight slaughtering and burning 59 school boys who were sleeping in their dormitory. That day, Federal Government College of Buni Yadi, Yobe state was no longer a sanctuary of learning but a house of mourning. Bodies of our young brothers and sons were being gathered from different corners of the raced down school building into the specialist hospital in Damaturu.
News of this death gained minimal media attention. Our leaders called the attack callous, senseless, bestial… our media gave it insignificant coverage, and that was all they were worth. Their parents and siblings went home to a very lonely phase grieving for the sons of promise that never lived up to it.
The incidence of the missing girls happened shortly after and interestingly gained the attention of the media globally. Perhaps because we believe the boys could not be returned to life and the girls had a chance to be rescued. Or maybe we were overwhelmed by successive tragedies that were now jostling for our attention, creating a pile on the memories of our innocent sons and brothers. Maybe violent death has become normative to us, we have become our grief, numb to the emotions of grief.
Months after months, we have hoped that the lives of these boys and all those lost to the evil of Islamic insurgency will count for more. Not much is achieved, the girls remain missing and Boko haram remains the greatest threat to human security in Africa. 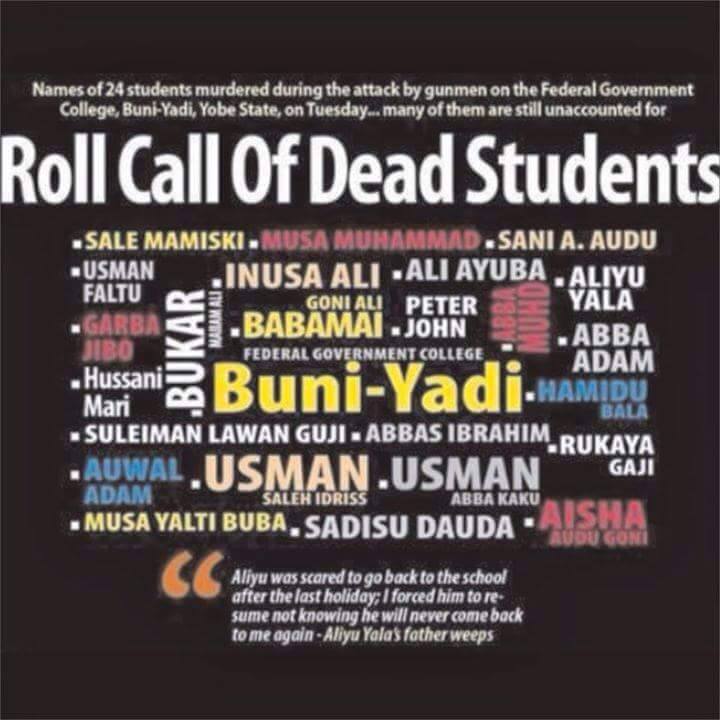 It is exactly one year today, our silence has made these young boys nameless and faceless. Our silence laid them to rest in unmarked graves. On this day, in place of their remembrance, 2015 Presidential election banters grace the headlines of our newspaper; there is neither a significant mention of them in the social media. We just didn’t stop in our track for some minutes of silence to the children we sent to school and could not protect.
Reflecting through this, I found an icebreaker for the training participants. Standing in front of the class minutes later, I asked them, ‘if you could talk to anyone living or dead today one last time, who would it be and what would you say to them?’ Like me, in all their responses, they gravitated to wanting to talk to their lost loved ones. In response to my reflective question, I thought I would choose the 59 school boys. If I could speak with them one last time, I will ask that they forgive us for muffling their lives and making their death count less.
Dear Brothers, your life and death matters to many, you were no vapour. It is for your memory that we will continue to strive for an inviolate world.  It is my hope that you souls find rest; it is my prayers that for your sake, the names of our children’s schools will no longer be written in letters of blood. It is my wish that in the coming election, we will vote remembering why you died. Rest in peace dear Comrades of Federal Government College, Buni Yadi.