‘Back from the boats,’ [Captain Harrington] shouts, catchin’ up the hand-spike. ‘The first man that touches a boat I’ll brain. Women and children first…’

~Harrington: A Story of True Love (1860) by William Douglas O’Connor

The reality of the lives and struggle of women and children in war front cannot be known by war mongers, it’s only the imagery of this experience that we see. The lived experiences of women caught in war zones are diverse. From decade to decade, these woes continue to the point of normalization. They are captured in different media forms like photography and films. But they are also captured in fiction.
I must accept that chronicling war experiences in fiction is a really difficult thing, especially if the writer has not lived through war. 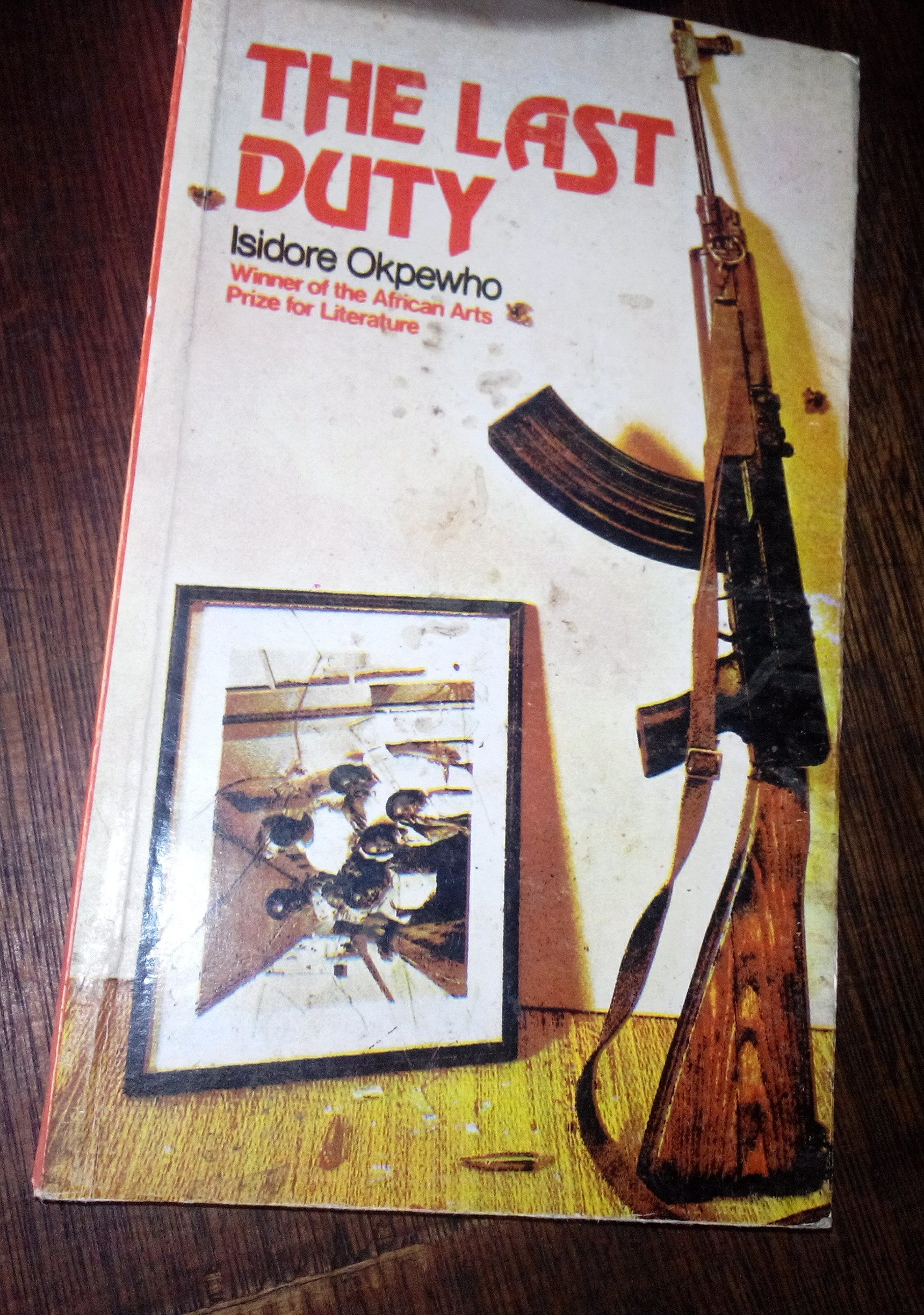 Yet between the lines of many fiction novels, you can have a glimpse of what life in the war front is like. Of all the fiction narratives I have read about war, the novel ‘The Last Duty’ stands out. Published in 1976, bagging the African Arts Prize for literature awards, I wonder why the excellent writer Isidore Okpewho has eluded me all these years. Perhaps he has maintained a low profile, but viewing war through the lens of his writing provoked a lot of high moment. Most significant is its ability to capture the experiences of civilians, especially that of women and children in the characters of Aku and Ogheneovo.
‘The Last Duty’ stylishly gave almost all the characters a space to tell their own war story; hence there was no single person narrative. Set in the fictional land of  Urukpe,we are exposed to a war in which every moment of it is pregnant with danger. Guerrilla air rades by the rebels happen and bodies are counted, the sounds of guns rattle in fury, tat-tat-tat-tat-tat! It awakens plain ancient fear, people learn to take cover according to civil defense instructions; under the tree, in the bunker, beneath the bed, at the foot of a wall, everywhere! Roads are chewed up and broken by the business of long fighting. Guns Booming, riffles cracking, invading planes dropping bombs…Diimm! Kpoai! Toai! There are endless wailing from the confrontations between two military forces; the federal and the Simbian. Guns answer to guns in deafening encounter. 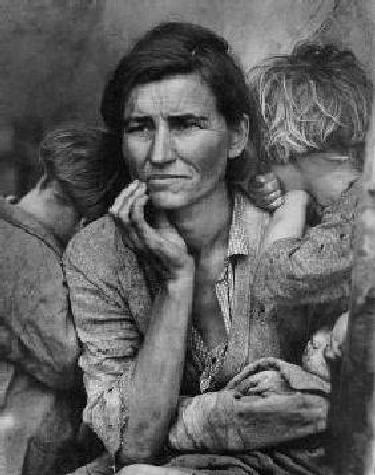 Dorothea Lange 1936 Photograph titled ‘Migrant Mother’ in honor of women and children that suffered in the great depression.

Between the lines of weaving this entire story, the struggles of Aku stand out.Life and time was hard upon her. She had many things to say of her life, more so, every character held a slice of this young woman’s physiological and psycho-social existence in the war torn Urukpe.  She comes into the scene sharing her dependency and loyalty to her beloved husband (Mukoro Oshivere)whom she was willing to pine for until his release from incarceration. She admits to the readers that she and her child Ogheneovo are not secure anymore in Oshivere’s  absence. Hostile eyes assail her, no one greets her, she is isolated for her husband’s misguided accusation of being a rebel supporter by Toje his commercial rival. Yet among her catalogue of woes, Toje poses a new kind of danger; he offers her kindness bringing food, money and cloth through Odibo to her. She can see in Toje’s eyes that his gifts has a hidden emotional invoice attached to them, she is right but again, she is helpless. As a suspected rebel with insolent freedom, she is not allowed to go to the market, how do they survive without the food he offers? In her words, ‘It is a dreadful thing to be at the mercy of someone, the slave of a compulsion you know you cannot fight.’
Through the many encounters with Toje, she wavered between grudging acquiescence and unspoken protest, ashamed to admit it, the desire in her has accumulated like pus in a boil. Her heart tussling between hope and fear each day, she launches into the unfriendly open with a passion only rudely tickled every time she departs from Toju’s poor performance of regaining a deserted manhood. Her thoughts are racing with questions, ‘do I wear disgrace unmistakably on my person… Toje’s whoring mistress, bound to minister to his animal desire at the price of food and clothing, maybe even protection and occasional words of comfort?’ In spite of this, she harbors within, some adulterous longings that now strives to overpower her, her painful fancy for the 3years overdue touch of a man eventually but shamefully realizes itself in her skin fellowship with disabled Odibo, the imbecile nephew and errand boy of  Chief Toje.
In Aku‘s words; ‘Frustration has driven me to the point where I will rather live the fact than the fiction of sin. Loyalty and devotion has been strained beyond all possible endurance. Neither the mind nor the body could  any longer fight the overwhelming presence of temptation…the body could no longer be supported by the will of the mind…the entire defense came tumbling down, like an unsheltered mud wall under relentless down surge of rain’
Self-gloated, overzealous antagonist Toje, wages what I call a silent guerrilla war against protagonist Mukoro Oshivere who until towards the end of the novel was a war prisoner, incarcerated by Toje’s frivolous charges. In Toje’s words, ‘The absence of Mukoro Oshevire …gives me the opportunity to re-establish my prominence.’ This absence destabilizing as it may be for Aku, gave Toje plenty space to unleash his politics of using sex as a weapon of warfare on Aku. In an environment of war, we are entertained by his many attempts at taking advantage of  Aku’s vulnerability to seek restoration for his deserted manhood which is now but a flab of flesh. Toje is finally beaten to his game by his ‘dumb and imbecile nephew Odibo  who though disabled and mocked all his life, finally gives to Aku the touch of manhood she had shamefully longed for. The revelation of this sex triangle brings the novel to a very tragic end that recreates Aku’s sorrow. 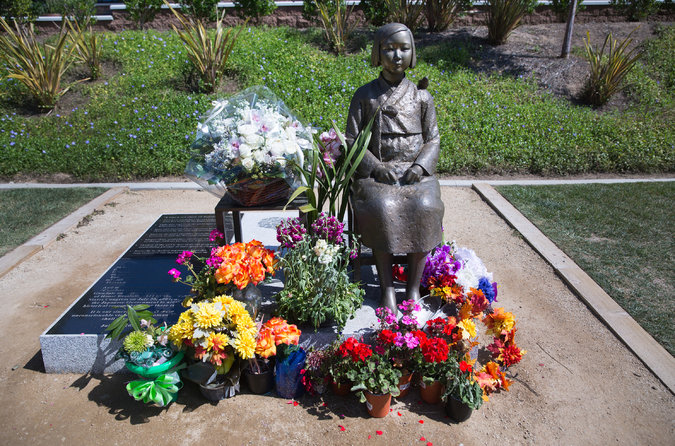 Korean-American groups persuaded the city of Glendale, Calif., near Los Angeles, to build a bronze statue of a “comfort woman.”Monica Almeida / The New York Times.

This fiction book, tells the story of what happens to women and children when men go to war. Like Ogheneovo,  children learns violence.  More so, the only toy left for children are guns, the ambition left to their admiration is to become a soldier. For women, displacement, rape with impunity, hunger, prostitution among others hangs over their lives. Aku’s experience is similar to that of the South Korean comfort women who served as prostitutes for the military, commemorating their woes in a status. The lives they had before the war is suddenly nibbled away with every gunshot and death and destruction around them.
Writing ‘Harrington:A story of true love in the 18th century, William Douglas O’Connor  is recorded to use the phrase ‘Women and Children first’.  This phrase has grown so wide and far to the point that the two words ‘women’ and ‘children’ are almost an alliteration. Beyond it being a sort of crisis conduct code in the maritime world, this phrase has gradually planted its self historically in almost every war speech.Protecting women and children has been used by leaders to sweeten their words when bidding for war. It is the holy mantra invoked to make intentions of advocating for or against war seem noble, it is used to placate the sound of war drums. 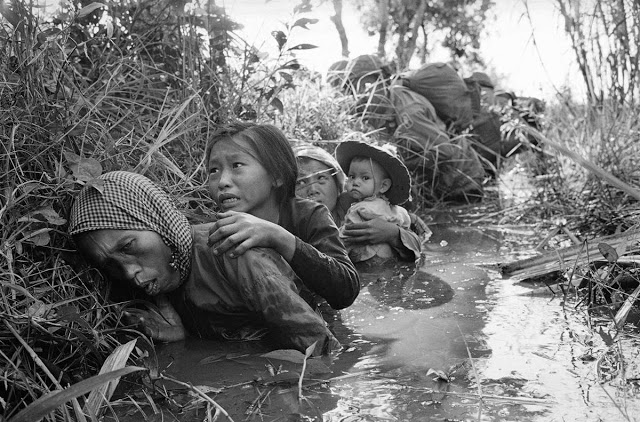 Vietnam War in Picture: Women and children crouch in a muddy canal as they take cover from intense Viet Cong fire at Bao Trai, about 20 miles west of Saigon on Jan. 1, 1966. http://tiny.cc/14stex

With benefit of hindsight, the adoption of this phrase, just like the Declaration on the Protection of Women and Children in Emergency and Armed Conflict (adopted in 1974) and the Fourth Geneva Convention for the protection of civilian persons ( adopted in 1949), however has made little or no impact to the lives of vulnerable non-combatants in the many war so far fought.  Do leaders just politically exploit the myth of women and children? Do they care to understand the true meaning of protecting women and children and the impact of not protecting them in the many war we tag them in?
In the words of Major Ali, the stranger from up country protecting  Urukpe,  ‘ that woman (Aku) meant more than just the wife of a detained man, … she was the measure of justice.’ The impact of war on women and children, more so the elderly and every vulnerable person, is the true measure of any war.  I wish that my vision of a war-less world is possible, but with hindsight, this vision has eluded human nature. I however agree with C. JoyBell C view on war; “the country with truly strong men is able to have soldiers that need not a knife, that need no guns! And if you can soar even higher than that; fight with your pens! Let us all write! And see the substance of the man through his philosophies and through his beliefs! And let one philosophy outdo another! Let one belief outlast another! And let this be how we determine the outcome of a war!”
To leaders who add to the sounds of violence, using women and children to muffle the drum beats of war, I will say this; there is more to us than guns and bombs, if truly you care about the dignity of women and children, you will stop these wars and come to an understanding with the innocent. Therein is your power.
To Women and Children caught up in the raging wars of  Syria, Congo, Sudan among others, I wish you courage for the days ahead that may be harder to get through and grace for when the time comes to let go. More so, from my depth, I wish you comfort.
Written by ~ Adaobi Nkeokelonye


Women and Children in Quotes 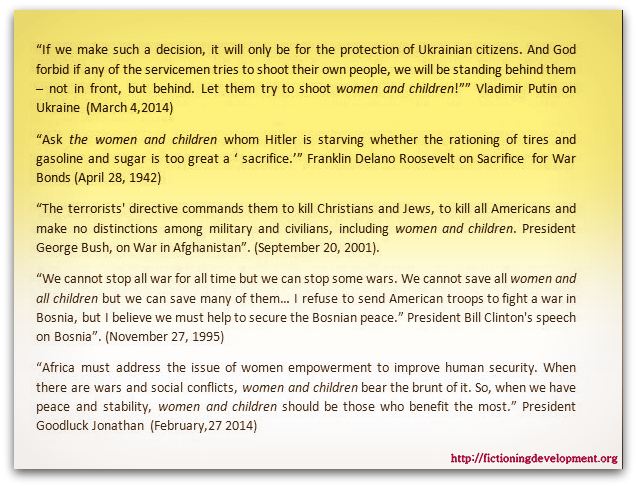 Extracts from War and Conflict Speech of World Leader with emphasis on ‘Women and Children’.