If you’ve ever smelt the mud, the dirt and earth on which countries of Africa are built on, you will tell they smell the same. But a different scent lingers in each country; it is the scent of the history upon which they are founded.
Gathering to tell is what I do when I want to understand history from the perspective of the novel. I have always relied on Nadine Gordimer to guide me into what it feels like caressing South Africa’s past. 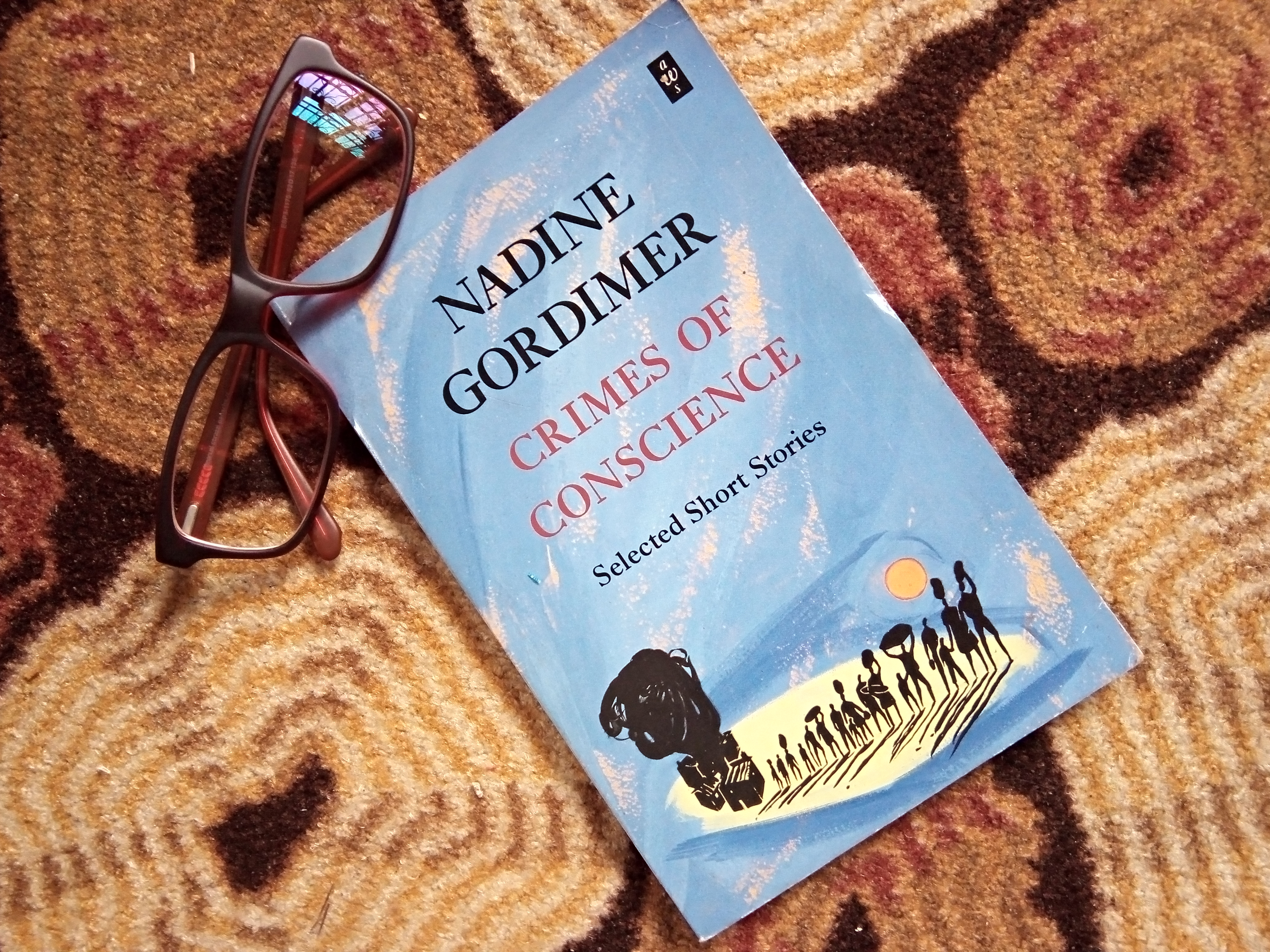 My choice this time was her anthology ‘Crimes of Conscience,’ which highlights how Apartheid left many South Africans with either the choice of alcoholism like the character of Rose in Blinder, or joining underground sabotage movements riddled with spies like the characters of Aly and Derek. In crimes of conscience, there is fire but no one sits around it;  at least long enough to finish their story. Nadine’s story tells of young men that go away and says little of wither-to:

The Young go away: once it was to the mines, now -the radio said- it was over the border to learn how to fight. Sons walked out of clearing mud huts; past the chief’s house; past the children playing with models of police patrol Land Rovers made of twisted wire. The children called out, Where are you going? The young men didn’t answer and they hadn’t come back’.

Crimes of Conscience being a collection of short stories only provoked a hunger for tall tales which will tell more about the young men’s journey. Bessie Head’s ‘When Rain Clouds Gather’ was that long tale that revealed why the young men left, where to and why they hadn’t come back. 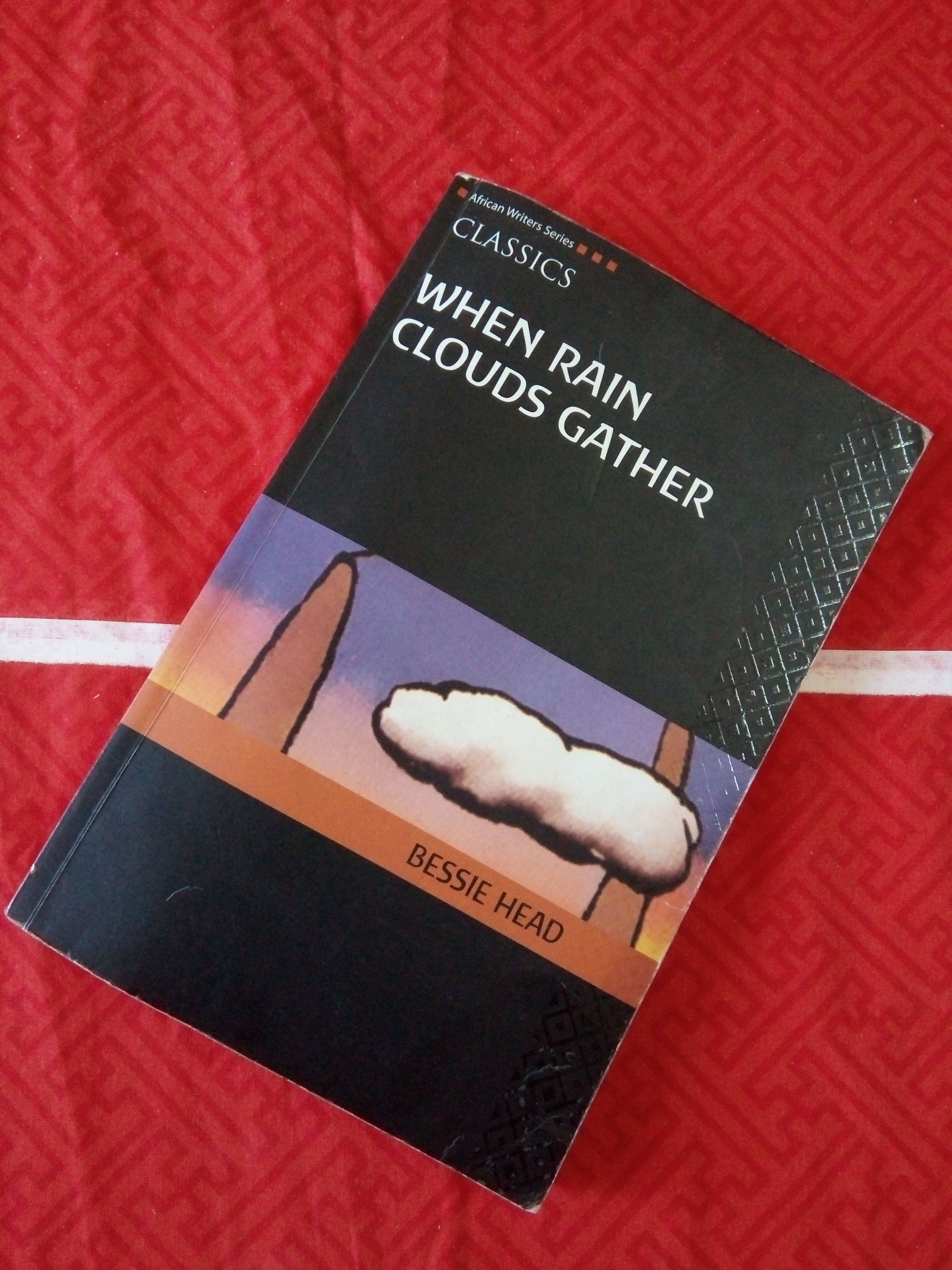 Makhaya the pivot of this novel is a young man set to flight by savagery and greed. He was tired of the Tin gods called the white men, with peaches and cream skin. He cared less of the old man in the sky who didn’t have the humility to put on a black skin.

‘I am Makhaya, the Black Dog, and as such I am tossed about by life. Life is only torture and torment to me and not something I care to understand.’

Makhaya’s name was an irony, it is for one who stays home, yet he didn’t. As the eldest child of his home, he choose his longing for a free world over a traditional expectation fraught with the grip of apartheid.

‘His reasons for leaving were simple: He could not marry and have children in a country where black men where called ‘boy’ and ‘dog’ and ‘kaffir’. The continent of Africa was vast without end and he simply felt like moving out of the part of it that was mentally and spiritually dead through the constant perpetuation of false beliefs.’

Wail of approaching sirens from the patrol van of the South African Police reminds him that the journey ahead will not be easy. The seven-feet-high barriers of close tautly drawn barbed wire stand to remind him of the mountains to conquer. But yet he looked up at the stars and they winked at him.

Moments after crossing the border, Makhaya’s demand for shelter is greeted with an accusation from a jarring voice of an old woman ‘I say You are one of the Spies from over the border…All the spies in the world are coming into our country. I tell you, you are a spy! You are a spy!’ But his quiet speech impresses her and she offers a spare hut for Ten Shillings. On settling into his makeshift accommodation for the night, he gets his next big shock as that 10yr old child with full bold stare offered herself.

‘What do you want?’ he asked
The hands darted back and there was a brief silence; then she said, ‘You Know.’
‘I don’t,’ he said.
She kept quiet as though puzzling this out. At last she said, ‘My grandmother won’t mind as long as you pay me.’

Like most illegal migrants, one discomfort about his journey is that he had to invent lies upon lies. He needed another lie to face registration as a refugee seeking political asylum in Bostwana. But his journey was not as invisible as he thought; the asylum office already lay in wait for him. Makhaya’s picture was on the front page under a headline: DANGEROUS SABOTUER FLEES BANNING ORDERS. His response to the question posed by the British colonial officer qualified him to fill the asylum form: ‘Do you like Kwame Nkrumah?’  With no need to lie anymore, Makhaya owned his Identity subsequently.

‘Where do you come from?’
‘South Africa,’ Makhaya said
The old man shook his head. ‘That terrible place,’ he said. The good God don’t like it.’

In stepping away from his shadowy live, he experienced the kindness of strangers. He was showered the hospitality of the poor in the village of Golema Mmidi; a place for people who have fled to escape tragedies of life. In Golema Mmidi; the land of crop growers, he finds a job and a home the very night he arrived. Gilbert Bafour gave him more than he had hoped for. His relationship with Gilbert Bafour the British Migrant becomes a paradox Makhaya will have to make peace with; running away from the White men in South Africa only to end up being saved by another White man in Bostwana was a difficult reality.

But Bostwana was not paradise, the country was in the grip of severe drought, had poor agricultural progress and grazing culture, the structural complexity was a challenge to the dream of a developed society which progressive Gilbert Bafour had for the country. Gilbert will find his self at the center of a violent storm for misunderstanding tribal land tenures in a bid to implement controlled grazing. For Africans the concept of cooperatives though similar to communal land ownership, was not the same after all; they definitely could not replace each other as Gilbert wished. Even where development is well intended for a people, distrust for the white skin and people in power made Gilbert’s truth appear a lie. In the imminent divides in Bostawa, Gilbert and Makhaya were left to figure out how to bring people and knowledge together but the antagonist Chief Matenge was no easy walk-over.

In his time in Bostwana, he will get to learn that Traditional prejudice and tribalism was the devil that drove Bostwana apart; the old man who had tried to dampen his hope on the night he crossed the border was only being realistic:

‘Ha, I see now,’ the old man said…You are running away from tribalism. But just ahead of you is the worst tribal country in the world. We Barolongs are neighbors of the Bastwana, but we cannot get along with them. They are a thick-headed lot who think no further than this door. Tribalism is meat and drink to them.’
‘Oh Papa,’ he (Makhaya) said. ‘I just want to step on free grounds. I don’t care about people. I don’t care about anything, not even the white man. I want to feel what it is like to live in a free country and then maybe some of the evils in my life will correct themselves.’

Like all migrants who are desperate to flee their country, they always believe the light bulbs will turn on the other side, they often underestimate the awaiting experience of being a refugee. Even if Makheya forgot to remember he was one, Chief Matenga reminded him, he kept the pot of hate boiling by pulling the refugee card. The narratives here point to the modern day sentiments that many have against refugees. People like Chief Matenge have no sun inside them, they have inherited contempt for humans who are in oppression or fleeing it.

Chief Matenge belonged to the insane part of mankind, but can a dog bark forever? His hatred for refugees was greeted with the best response from his kind brother: ‘The world is full of refugees.’ Chief Seketo told him. Chief Matenge’s evil plans rather provoked Makhaya’s residency in Bostwana to be granted, with support from George Appleby Smith who stuck his head out for him against a government that was strongly anti-refugee.

Over time in the village of Golema Mmidi, Makhaya learnt that the grass was not greener on the other side, and that oppression had no race; beyond the white oppressors of Africa was also the African Oppressors; Africans stealing from Africans like Chief Matenge. In spite of  Makhaya’s experiences, being charitable to a civilization as was the case in South Africa remained hard, after all those years of strife and struggle cannot be buried like that.

Published in 1969, the character of Makhaya mirrors the author’s life. He was her double, a dream the author Bessie Head evoked to help her live her realities of being stateless, living as a refugee in Bostwana having fled apartheid in South Africa. Her narratives are as relevant today as ever before. She projects the idea that refugees are also migrants. In Zulu’s Makhaya-who just desires peace and harmony- meeting British Gilbert-who is running away from England, a country he no longer loved- in Bostwana, Bessie tells that migration is not a thing of the North or South.

Pivotal to reading this book was my need to understand what happened to people in oppression in South Africa during the apartheid. Makhaya’s story tells of those whose only choice was to flee and pursue freedom in another space. Like them, in present day world, nearly 20 people are forcibly displaced every minute as a result of conflict and persecution. UNHCR estimates that over 22 million out of an unprecedented 65 million people around the world who have been forced out of their home are refugees.  Until now, refugees suffer torrents of hatred with only pockets of love to counter it.