Reading the Lion and the Jewel as a child, I saw an old Bale Baroka that was in contest with Lakunle to marry the otherwise beautiful

Sidi. That was all I saw. Reading this rather complex drama with so many themes and interpretations again this year, one phrase stuck to my mind, ‘the stranger with a one eyed box.’  What strikes me most is the interpretation I could readily give this in the context of development.

Lakunle captures the character of the ‘stranger with the one eyed box’, the man from the outside world. Lakunle who detests the idea of paying Sidi’s bride price, takes photos of Sidi and hitherto, a picture book is produced about the village. There is the picture of Sidi on the front page. Sidi is overjoyed that she graces the cover and other leafs in the magazine, and her beauty will be announced to the world. To note precisely how well placed she is in the magazine, she asks ‘Is not Bale’s image in the book at all?’ The response was ‘oh yes, it is. But it would have been much better for Bale if the stranger had omitted him altogether. His image is in a little corner somewhere in the book, and even that corner he shares with one of the village latrines.’

Metaphorically, the above narrative addresses the power of representation. I imagined it to capture the western process of representing Africa with the picture of its unassuming children floating on their screens as a tool for fund raising. Many times the power of the lens to capture, prove and evoke a particular perception has been used severally by unethical western photographer to create and reinforce the identity of a poor Africa through the faces of the children gracing the papers, television screen amongst other mediums.
You know what I am talking about, those pictures that rape a child’s dignity. Those pictures that go with captions of poverty, hunger, the picture of a teary black child, clad in pants or maybe dirty clothing, with grimy hands, with a little startle and helplessness all over his or her face.

Many times I imagine they look helpless in the face of an adult stranger clicking away their faces with a camera, seeking not their consent. If you have been in Europe and watched the television, you certainly know what I am talking about. Otherwise, you may not fully grasp this because these pictures like Sidi’s pictures are not taken for the consumption of the calibre of people objectified therein.

This issue occupies a problematic place on the theatre of fund raising in international development. Yes Aid Agencies are doing amazing jobs supporting developing countries with fund. They need funds to replenish; they need to make people donate towards helping needy countries and supporting different causes. While the intentions may be great, the medium of realising their objectives remains in questions.
Kevin Cater the Pulitzer award winning photographer of the picture of the ‘Sudanese Girl’ must have undoubtedly had good 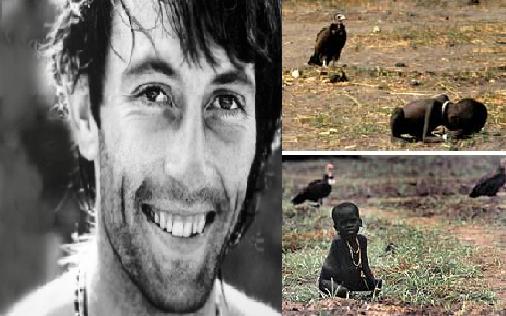 intentions, the award was even better. But the good intents collapsed under the weight of the criticisms of taking a dying child’s picture without saving her. This experience was so bad it was noted to influence Cater’s suicide few months later. The world many times judges actions and not the intentions. The act of capturing a particular moment, a particular expression, a singular scene in a person’s life and continuously recycle it even when the person has moved on from there has come into question severally. Beyond the responsibility of the photographer is an organisation that understands the implications of using the face of poor children as an emotional anchor to justify their actions.
Children in challenging or vulnerable situations in European Media always have their faces obscured to protect them and their future. There is a double standard here as this gesture is not extended to the African child. This particularly disrespects the dignity of the very lives the agencies claim to help. Is there no better way to raise funds without using the innocence of a child who in most cases is unaware of the distance his or her picture has travelled?
A striking connection is made in the fact that the pictures of Sidi like the pictures of these children are not meant for the village 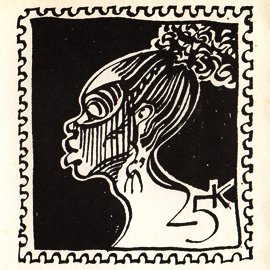 consumption. These pictures continue to challenge the governance of the countries they are taken from. There was a promise to put Sidi’s image on the stamp; this is comparable to the image of these children

being iconic to the poor African identity. People, who are subtly pressured to give by the vulnerable positioning of another, will subconsciously see the beneficiary from a position of weakness or as a lesser person. Over the years, poverty has stuck as an icon for African countries; it has even become natural resources of the people. Every natural resource is to be paid for, there are ethics and laws guiding its purchase, but again the poverty of Africa is exploited freely. Lakunle was not going to pay what it cost to have Sidi. To him, ‘to pay the price will be to buy a heifer off the market stall’. Worthy of note, is the positioning of Baroka the Bale of Ilujinle by the latrine, the African government is ridiculed in this process as they are portrayed as powerless in protecting the dignity of their future; their children.
I imagine different scenes, I imagine the power relation between the photographer and the subject, the power behind the lense, the power to define. What will the picture of this stranger look like if the tables were turned and s/he is captured by the child? If a child 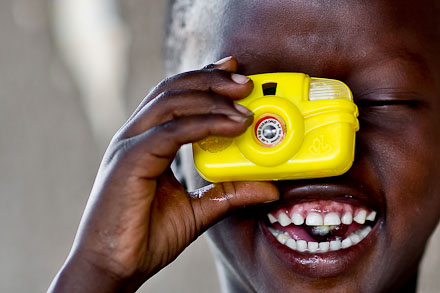 was asked to tell their own story through the camera, what story will s/he tell of that moment s/he was snapped? Will they tell the story of a poor Africa or a warm Africa? The story of a hungry Africa or of their loving father, mother, brother, sister and friends? I am still imagining.
Consciously or not, the Author Wole Soyinka’s injection of the ‘one eyed box’ is a way of presenting how people select and interpret what they want from a field of many activities happening around them.  The myopic perceptions created by this imagery are captured in the word ‘one eye’ which tells that the true context may not be well appreciated. In the case of children who have a long life ahead of them, these pictures, their recycling and usage have them trapped in the contest of vulnerability 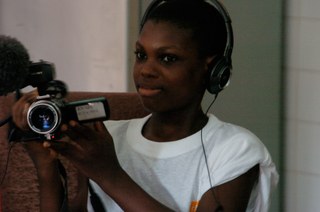 even when in reality the children have grown away.
To the next stranger with the one eyed box intending to click unethically at a poor child and travel with their pictures to landscapes the child may never step foot in, reflect on this. I hear the children speak in Sidi’s voice saying  ‘every time your actions deceive me, making me think you merely wish to whisper something in my ear,  then comes this licking of my lips with yours, it’s so unclean’.