His murder was a travesty to modern day Justice, his death by hanging made him an iconic casualty of a capitalist world.  But maybe

we can do him justice by validating the causes he represented while he was amongst us. One of them is protecting the rights of Indigenous people all over the world. This also means protecting their languages from extinction and giving voices to people living on the margin. Ken Saro-wiwa fought for the Ogoni land, an ethnic minority in Nigeria whose landscape were targeted and destroyed for crude oil extraction by Royal/Dutch Shell Group, or do we say destroyed by development?
In his fiction novel ‘Soza Boy’ we follow the character of ‘Mene’ on his journey of transformation from ‘Mene’ to ‘Soza Boy’ (Soldier Boy). What is interesting about Saro Wiwa’s novel is that Soza Boy does not speak the Queen’s English. He communicates to us in Broken English; a translated version of an English Language which has left its natural boundary. It’s just the way it is spoken in Dukana Village.

“Some people have chopped the people food and sold the cloth that the Red Cross people ask them to give all the people. They are selling this food and cloth and afterwards they will preech to the people… these bellymen are friends of the sozas and of the politicians and the traders. And they are all trading in the life of men and women and children. And their customer is death.”

“Dukana is not like Dukana again. Where are chief Birabee them and all those his chiefs who every time will take bribe from the people? Where is Pastor Barika singing his song in the morning and in the evening and every Sunday telling all his lies from the pulpit to the women of Dukana? Where are all the young men with their long prick and big blokkus? And where are all the young young girls with JJC just waiting for the young men? Sozaboy, Dukana don die. The war have buried our town.” 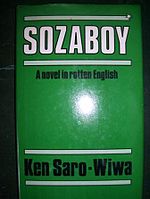 Perhaps this explains why this work of fiction was not popular amongst readers despite how impressed I am by his ingenious and humorous writing, making him poignantly the best writer for the issues raised below.
According to the late writer, “Sozaboy’s language is what I call ‘rotten English,’ a mixture of Nigerian pidgin English, broken English and occasional flashes of good, even idiomatic English. This language is disordered and disorderly. Born of a mediocre education and severely limited opportunities, it borrows words, patterns and images freely from the mother-tongue and finds expression in a very limited English vocabulary. To its speakers, it has the advantage of having no rules and no syntax. It thrives on lawlessness, and is part of the dislocated and discordant society in which Soza boy must live”.
This work highlights strongly the conflict in the language choice of global development. Language is an expression of nationhood and identity; it is a vital tool for the transmission of values, spiritual and traditional beliefs, and the entire histories of a people from generation to generation. In most countries, even homogeneous ones, we have significant minority languages. But the desire for globalization is perhaps sending indigenous languages around the world to extinction. 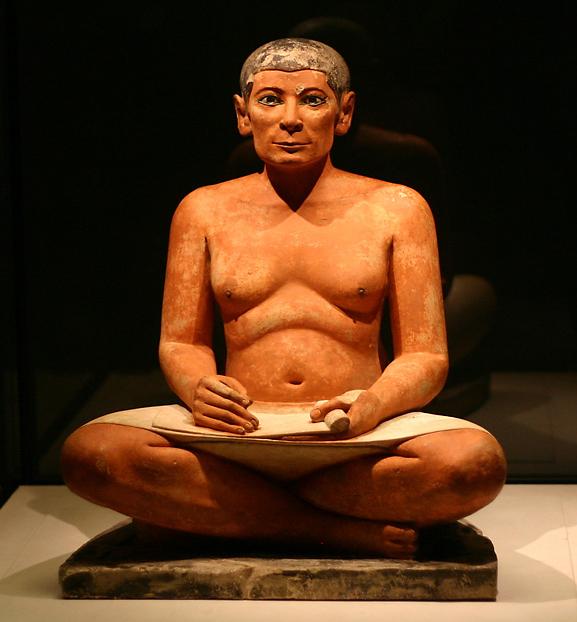 Critics of ‘Soza Boy’ hit mostly on its choice of language as limiting and ridiculous. This leads me to wonder how we can promote diversity through the existence of different cultures, identity and language when we do not appreciate and encourage the use of minority languages. How do ethnic writers from multi-lingual societies like India and Nigeria confront issues of self, ethnic and national representation in language choices in the face of global audience from dominant cultures? In many cases, writers are forced to think and write in dominant languages about rural realities and minority issues. This presents a dis-connect as I wonder if the local people ever become their readers or benefit from the message they carry.
Suffice to say that over half of the ethnic minorities in the world who are often targets for development, are not English or French 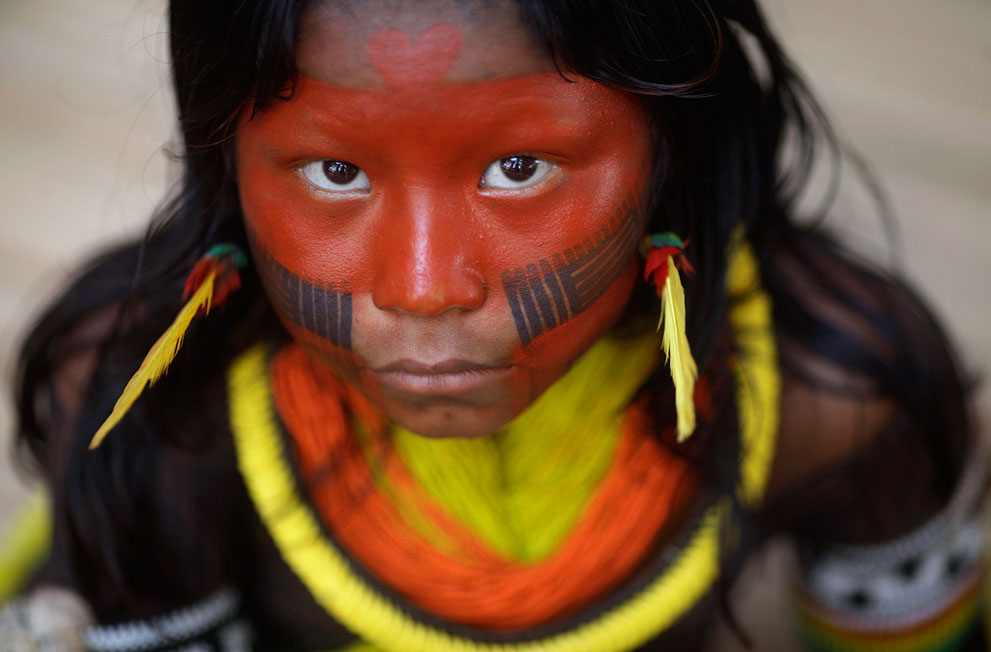 speakers. In most cases, they are the custodians of the indigenous languages. Yet dominant languages are promoted to them through education as the pre-requisite for a poverty free life, an assurance for socio-economic mobility. But is mother tongue sustenance a barrier to socio-economic development or education? Who says people are not literate because they were educated in local languages?
Education is a major vehicle for empowerment, it’s one of the Millennium Development Goals, used widely to promote sustainable development, but its implementation is also fracturing indigenous languages. It is widely understated, that through formal education, people learn a dominant language at the cost of the mother tongue. 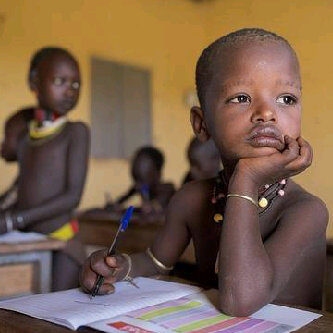 Language discrimination noted in educational approach to development may indeed be reinforcing inequality; it depreciates the capabilities of a people as their language is sent to the bin for the choice of say English, French, German amongst others. It can be argued that the use of dominant languages even in very influential development research concerning the well-being of indigenous people perpetuates subtractions in global linguistic repertoire.
Putting the importance of understanding and promoting local use of language over a dominant one can be a good approach to combating poverty, promoting democracy and citizen’s participation. A language carries with it cultural strength, if a child is educated in a dominant language; they are indirectly transferred to a dominant culture. They probably will suffer low self esteem compared to their peers who are lucky to have their mother tongue as a dominant language. More so, the trans-generational transfer of that language is broken and eventually threatened by extinction.
Adopted by the General Assembly in 2007, the United Nations Declaration on the Rights of Indigenous Peoples – along with other relevant human rights standards – provides the foundation for strengthening language rights and discouraging extinction of languages.  But are not these declarations just a Paper Tiger? 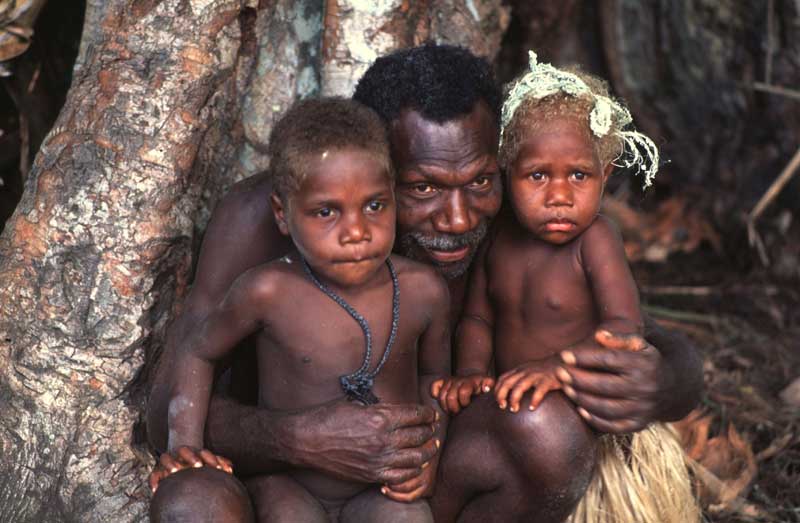 How does development approach respect or appreciate language right of indigenous people? Could this in any way give reason to the conflicts that arise between institutions and aboriginal people who reject development? Could the conflicts in places like Orissa in India and Ogoni in Nigeria regarding the management of  their natural resources have been avoided if their language, values and rights as a minority where protected?
If the gains of making the world a place with one culture, fewer language, same people is perhaps worthy enough, then the promoters have to grasp the importance of appreciating indegineous languages. The role of promoting and understanding indeginous languages may be underplayed, but therein lays a key trigger for sustainable development.

Government and development agencies/non-governmental organization can still right the wrongs if for example, we consider promoting reading and writing cultures in indigenous languages. More authors may choose to go the way of Ngugi wa thiongo who now writes in his mother tongue despite the minority they present in readership.
Ken Saro Wiwa, is fondly remembered as a civil right activist, writer, with many more books which I intend to read. His positive contributions were cut short by a government that was determined to end his political career at all cost. Saro-wiwa may be dead, but the language and rights of indigenous people does not have to die with him. 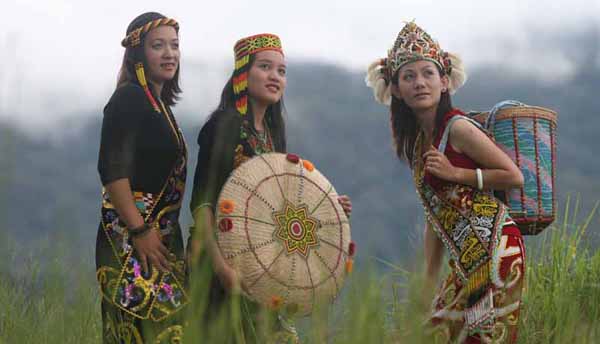